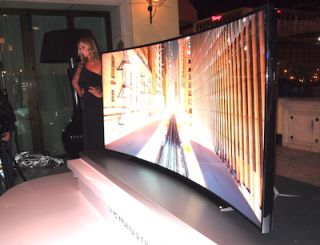 As part of a new lineup of curved Ultra HD TVs, Samsung unveiled its marquee 105-inch Curved UHD TV at CES 2014. This massive set will be joined by Samsung's U9000 SeriesCurved UHD TVs, which will be available in 78, 65, and 55-inch sizes.

The curvature of the sets are designed for an optimal viewing distance of 3 to 4 meters, and are complemented by Samsung’s proprietary Auto Depth Enhancer, an algorithm that analyzes regions of images and automatically adjusts contrast for a greater sense of depth.

All TVs support 4K standards including HEVC, HDMI 2.0, MHL 3.0 and HDCP 2.2. They also use Samsung's UHD Evolution Kit, a box that sits on the outside of the TV and contains all its processors. This way, customers can swap out this module with the latest Samsung UHD Evolution Kit, in case uHD standards change.

Additionally, the Smart TVs feature Multi-Link, which lets users split the screen between what they're watching with contextual information alongside. For instance, you can watch a football game on one part of the TV, and pull up player stats and your fantasy team on a Web browser on the other half of the screen.