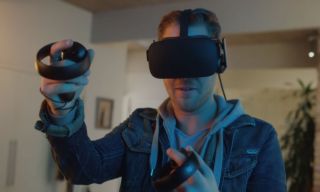 LOS ANGELES — Although a lot of industry insiders are placing their virtual reality bets with the HTC Vive, you shouldn't count Oculus Rift out just yet. The company just announced 30 new titles — 20 of which that will be compatible with the company's long-awaited Touch controllers, slated to debut in time for the holidays.

Titles I'm looking forward to include Insomniac's The Unspoken, which I've played with previously. Folks searching for the Harry Potter version of Fight Club, need look no further than this title as you lob fireballs and teleport around the arena.

For something a bit more stylistic, there's the indie darling, Superhot VR. Sort of like a ballet, but with bullets, the game freezes time until you move, allowing you to set up beautiful killshots while avoiding enemy bullets in this strategic FPS.

Gamers nostalgic for the good ole days of rail shooters with light guns, should check out Killing Floor 2: Incursion. Players will be rooted to one spot tasked with mowing down wave after wave of mutated abominations with your handy light guns, err Touch controllers. As you progress further in the game, you'll also get the chance to wield some blades and a few other weapons.

This takes the term "wandering heart" to a whole other level. In Wilson's Heart, you play as a man who wakes up to discover that his aorta has been replaced with a strange device. From there, you'll be navigating the world using natural hand gestures to get to the bottom of these strange circumstances.

The new additions to Oculus' coffers places its total app and game count above 300. However, it remains to be seen if either the Touch controllers or the new titles will help sway things back in the company's favor.