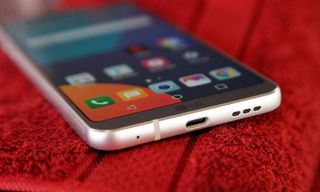 Leaked photos of LG’s next flagship phone, the G7 ThinQ, confirm that the device will sport an iPhone X-style notch.

Photos of the G7, obtained by TechRadar, show a device with a 6.1-inch edge-to-edge display that features a cut-out for the front-facing camera. That design decision, which was mocked in some circles when Apple released the iPhone X, is coming to more Android phones. For example, Asus put a notch in its $500 flagship ZenFone 5Z, but its display is LCD as opposed to the iPhone X’s OLED panel, while OnePlus has confirmed that a notch is coming to the OnePlus 6.

According to the International Business Times, LG is rumored to be working on two G7 models — one with an LCD screen and one with a higher-end OLED display.

LG has reportedly been working on a phone with a notch for some time now, but the leaked photos all but confirm that the G7 ThinQ will look like an iPhone X.

The photos also seem to indicate that LG is adding a new button on the left side of the phone beneath the volume controls while moving the power button to the right side. That left button could be a trigger to call up an AI assistant similar to how the Samsung Galaxy S9 has a dedicated button to summon its Bixby digital assistant.

TechRadar also obtained screengrabs of the G7 ThinQ’s specs showing that the latest Qualcomm Snapdragon 845 chip will be the brains of the new device. The same CPU powers Samsung’s Galaxy S9. The G7 will ship with 4GB of RAM and 64GB of storage, which will likely be expandable with a microSD card.

If design renders prove accurate, the G7 ThinQ will also have a glass back for wireless charging, a dual-lens camera with a fingerprint sensor just below it, a USB-C charging port and a headphone jack.

We'll see if the rumors are true when LG takes the wraps off its follow-up to last year's G6, potentially as soon as next month according to TechRadar's report.