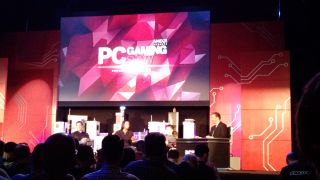 LOS ANGELES – Everyone loves PC gaming. After all, a game console is a game console, but a gaming PC is a game console, an entertainment center, a productivity tool and a gateway to the wonders of the Internet. PC Gamer magazine teamed up with a number of corporate sponsors to highlight PC gaming's place in the modern world at E3 2015, but the resulting presentation was mostly stuff we already knew spread over the course of an unprecedented two-and-a-half hours.

I attended the PC Gaming Show tonight (Jun. 16) to cover it for Tom's Guide, but there's not much point in providing an exhaustive breakdown. Popular eSports commentantor Sean "Day9" Plott hosted the evening, and to his credit, held the entire event together. In the hands of a less capable host, the PC Gaming Show may have been a total washout, but Plott managed to keep the proceedings as entertaining and professional as possible.

For those who didn't catch the livestream (or tuned out somewhere in the middle), the night played out like this: Plott would introduce an important figure or two in the modern gaming scene. The two or three of them would talk at length about whatever game, piece of hardware or general technology they were working on for a few minutes, and then the next speaker would come on.

This may sound like a solid enough plan for an E3 showcase, but in practice, it did not work well. For one thing, there were way too many speakers. Most E3 press conferences last between 60 and 90 minutes; the PC Gaming Show dragged on for at least two-and-a-half hours. Furthermore, while we did get a few new trailers and game reveals, there was nothing substantial or surprising. Interviewing developers about their games is usually interesting, but E3 is the time for unexpected new announcements, not fleshing out the fine details of games that have been on players' radars for months.

To be fair, some of the conversations proved to be fascinating. A sneak peek at Deus Ex: Mankind Divided showed how powerful PCs can take advantage of 4K resolution and sophisticated lighting to provide more immersive environments than consoles. Phil Spencer from Microsoft revealed that some popular Xbox One games are coming to Windows 10. Lisa Su at AMD introduced the smallest 4K-compatible graphics card, as well as a powerful new form factor for gaming PCs. Blizzard promised a free, three-mission StarCraft II expansion, Whispers of Oblivion, which will bridge the gap between Heart of the Swarm and the upcoming Legacy of the Void.

Even so, none of the announcements quite rivaled the press conferences from Sony, Microsoft, Bethesda and other major players. PC gamers already know that they generally possess the most powerful gaming devices; I would have liked to see a show that convinced the rest of the gaming sphere why PCs are such a hotbed of indie, mid-tier and big-budget activity lately.

No E3 event is perfect in its first iteration, and I would like to see another PC Gaming Show at E3 2016. Make it a little shorter and a little more unpredictable, and it won't be hard to see why PCs, though expensive, are still the most versatile and high-fidelity way to game.