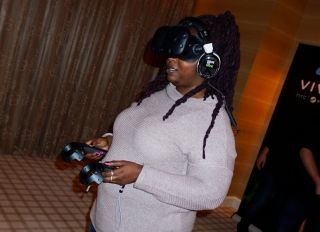 CES 2016 proved to be an exciting blend of meaningful tech evolution and eye-popping innovations. In the latter category, we saw smart shoes you tighten and warm up with an app, and an iPad-controlled quadcopter that will fly humans. But a certain electric supercar stole the show, along with multiple virtual-reality breakthroughs in the desktop and mobile realms. We also saw big steps forward in drones, smart appliances, TVs and especially gaming PCs.

After meeting with dozens of companies and debating the merits of many products in lots of categories, we compiled this list of the very best tech CES 2016 had to offer.

2016 is the year virtual reality takes off, and the Vive Pre is one of the reasons we're so excited. This 2nd-generation developer edition (which brings us one step closer to the April consumer launch) adds a front camera that improves upon HTC's already impressive room-scale tracking, which enables you to walk around in the virtual world. Now, HTC's handy Chaperone feature will not only tell you when you're close to a wall by displaying a grid, but also show you real-world objects in your VR view, like tables, chairs and people. Once developers leverage the camera, they'll be able to deliver all sorts of compelling mixed-reality experiences.

We saw tons of slick and powerful desktops at CES, but only the Cyberpower Pro Streamer (available now, starting at $1,899) managed to cram two complete PCs into a single space-saving machine. Built for broadcasting to places like Twitch and YouTube, the Pro Streamer houses two separate systems — one for gaming, one for streaming — in order to keep the performance load low and ensure a slowdown-free experience for audiences. The Pro Streamer isn't just an achievement in cool design; it's also proof that Cyberpower is looking to help gamers become the Internet's next superstars.

With a look that's reminiscent of a stealth bomber, Parrot's upcoming Disco drone (price TBD) reaches top speeds of 50 mph and can stay in the air for 45 minutes. Plus, it will give drone enthusiasts the thrill of piloting an aircraft with minimal risk of a crash, thanks to the Disco's autopilot assist features, which keep the drone aloft while you control altitude, speed and direction. Even takeoffs are a breeze: You give the Disco a shake and toss it into the air, and the drone will circle to a cruising altitude of 164 feet until you're ready to take control. We can't wait for our first test flight.

When it comes to accurate blacks and vibrant colors, nothing beats an OLED screen, and LG is still at the forefront of producing these high-end displays. Coming in the first quarter of this year for a cool $7,000, the LG Signature G6 series has it all: 4K UHD resolution, support for high dynamic range protocols, a stand that doubles as a set of powerful speakers and an elegant glass mount that's less than 3 millimeters thick. Part television, part modern art piece and part engineering marvel, the LG Signature G6 will display all of your favorite movies, shows and games with unparalleled color accuracy.

It's hard to find a better smartphone value. For $199, the Honor 5X from Huawei packs a vibrant 5.5-inch display, a useful fingerprint sensor and a generously sized battery into a solid metal body. You can assign specific shortcuts to each finger that you lay on the sensor, so calling your favorite contact is as easy as putting your finger on your phone. Security features, such as Privacy Protected, hide your sensitive pics, apps and messages from prying eyes. Plus, the 13-megapixel rear camera and 5-MP front camera are great additions for the price.

This fridge has everything but the kitchen sink. Its 21.5-inch touch screen is the centerpiece of its connected features. With it, you can order groceries through FreshDirect or use voice control and Amazon's Echo to order everything else. The Family Hub also lets you see what's inside even when it's closed (and when you're at the store), send messages to family members' smartphones and vice versa, and sync everyone's calendar in one place. A future software upgrade will turn this appliance into a smart home hub, too. Pricing has yet to be finalized, but when it comes out this May, we'll want one.

At CES 2016, Faraday Future's FF Zero 1 concept car enchanted reporters, dropped jaws and consistently had one of the largest crowds on the show floor. This prototype race car has aggressive styling that stands up to designs of other hypercars, and with 1,000 horsepower coming out of its four electric engines, it has the grunt needed to back up its appearance. But this concept car isn't just for show, because the FF Zero 1's modular electric chassis will shape all of Faraday's upcoming vehicles. The body of the car also features a clear channel that runs through the center to let passersby look nearly through the length of the car. Tesla better be ready, because Faraday's future is one we want to live in.

There were lots of smart shoes at CES, but all of them have the same limitation: Once the shoe wears out or you want to wear a different pair, you can't remove the tracking sensors. Mettis Trainer ($199 on preorder) solves that problem by putting all of its sensors into a removable insole. These shoes can measure the pressure you're applying to different parts of your feet, making them useful for a wide variety of sports, from running to golfing. The rechargeable batteries are good for 12 hours of use, and the company is releasing an API for importing data into fitness apps.

The SteelSeries Rival 700 doesn't look like any other peripheral on the market. This gaming mouse features swappable face plates, sensors and cables, but it's the tiny OLED screen on its side that sets it apart from the competition. Now, you can upload your favorite animated GIFs to differentiate between game profiles in high-definition gray scale. The Rival 700 also features in-game vibration, although at the moment, it's restricted to Counter-Strike and Dota 2.

This colorful, saucer-shaped entertainment robot can play tabletop soccer or pool, chase your cat around the living room or give your favorite action figure a ride around the house. Thanks to a planned ecosystem of expansion modules, you'll be able to add a tiny rocket launcher, Wi-Fi connectivity or a camera that turns this fun-loving automaton into a security or telepresence system. Developers will have a chance to build their own expansion modules, program the ZoZbot or design their own game boards after the product starts shipping in May for $149.

Sennheiser has figured out how to bring audio up to snuff with the visual advancements taking place in VR. The company's AMBEO 3D audio technology features 9.1 audio mixing that takes sound reproduction to the next level. It's supported by a virtual-reality microphone (available beginning in the third quarter of 2016) that captures a more complete range of audio. Audiences will require a deeply immersive field of sound to drift into virtual worlds like the fantastic experience of Soulpix's Eden, which utilized the Sennheiser 3D sound-rendering engine with great success.

The Portal router from Ignition Labs proposes an attractive solution to the congestion problems plaguing your Wi-Fi network: open up more lanes to traffic. The router does this by tapping into parts of the radio spectrum in the 5-GHz band that many routers aren't using because the dynamic frequency selection is usually reserved for emergency services. Features like radar detection and predictive channel changes let the Portal tap into this spectrum without interfering with emergency services or disrupting your connectivity. Ignition plans a Kickstarter campaign to fund the Portal — backers will be able to pick up the router for around $149 — but the company also hopes to license the technology to other router makers.

For 3D printing to go mainstream, it will require devices that are priced attractively for consumers. That's why the $269 da Vinci Mini from XYZprinting is so appealing: It makes 3D printing affordable enough for a home or classroom. Set to arrive in the third quarter of this year, the da Vinci Mini offers more than just a low price tag. The printer is compact without sacrificing build volume, and it offers a number of features, like automatic calibration of the print bed, that make the device appealing to 3D-printing newcomers.

MORE: The $269 da Vinci Mini Could Be Your First 3D Printer

Even though many people may balk at its $6,000 price, a look at the D5's specs makes that price tag feel like a bargain. Not only does its low-light range extend to an unprecedented ISO equivalent of 3.28 million, but this 20.8-MP monster features the new Expeed 5 Image processor, 14-fps burst shooting and 153 autofocus points, which are supported by a dedicated AF processor (another first for Nikon). This means you'll get tack-sharp images, in almost any situation — light or dark. The camera of action photographers' dreams is now a reality.

MORE: Nikon's D5 is So Good in Low Light It's Scary