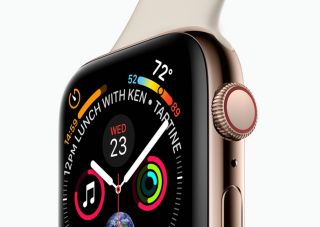 Along with the just-leaked iPhone XS, Apple is also expected to announce a new smartwatch, the Apple Watch Series 4, at its event on September 12.

This new watch will have an edge-to-edge display that's about 15 percent larger than on the current models, according to 9to5Mac.

Leaked images obtained by the site also show a new watch face with additional complications (widget-like data, such as the date and weather) in the corners of the screen.

MORE: Apple Watch Series 4 Rumors: What to Expect From Apple's Next Smartwatch

For example, there's a timer in one corner, the temperature in another, sunrise/sunset in a third, and the UV index in a fourth. That, in addition to four complications in the middle of the display, means that you'll be able to get more information at a glance.

Chances are users will be able to customize what appears in each of those watch faces. Other changes based on the images include a redesigned digital crown, as well as an additional hole between it and the side button.

We'll know more once September 12 rolls around, so stay tuned.