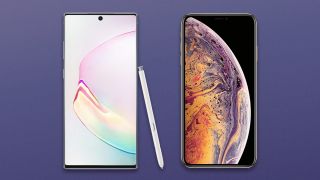 The same smartphone back-and-forth seems to happen at this time every year. Samsung unveils its latest Galaxy Note models, and then we wait a few weeks to see how they compare to whatever Apple is cooking up. The Galaxy Note 10 and Galaxy Note 10 Plus have arrived, so it's time to speculate about how they'll measure up to what Apple presumably plans on releasing next month, when the iPhone 11 will take its turn in the spotlight.

Here's how the Apple-vs.-Samsung debate stands after this week's Note 10 debut and ahead of the new iPhones' arrival.

By offering two different size options for the Note, Samsung's got an answer for both the iPhone XR and the iPhone XS Max. Or should I say another set of answers, since the Notes join three different models of the Galaxy S10? That means Samsung basically has five flagship phones (seven, if you want to count the 5G variants of the S10 and Note 10).

This follows an interesting overall trend we're seeing from the world's leading smartphone manufacturers: Both Samsung and Apple are offering more physical sizes of their flagship phones than ever before.

It's a smart move. As smartphone technology matures, one of the most important choices a buyer can make is to find the phone that fits best in their hand. And we've all got different hands.

Samsung's introduction of the 6.3-inch Galaxy Note 10 alongside the larger, 6.8-inch Galaxy Note Plus feels similar to what Apple did last year with the debut of the iPhone XR. In fact, the two phones are quite similar; the 6.1-inch XR screen is a bit smaller than the 6.3-inch display on the Note 10, but the two phones are very close in size. The Note 10 has a higher-resolution OLED screen, but the LCD-based XR costs $200 less.

Meanwhile, the Galaxy Note 10 Plus offers a 6.8-inch display that's noticeably larger than the 6.5-inch diagonal OLED on the iPhone XS Max, mostly thanks to the 0.2 inches of additional height on the Note 10 Plus versus the XS Max. If we take iPhone rumors at their word, Apple plans to enlarge the iPhone XS Max even further — though not until 2020. Before that, the Note 10 Plus will retain big-daddy bragging rights.

Based on a benchmark leak, it seems that last year's scenario is playing out again regarding the speed of the new Galaxy Notes; they're not going to surpass last year's iPhones, let alone catch them.

This is one of the biggest advantages Apple enjoys over its Android competition, which depends on Qualcomm's processors to keep advancing. The Snapdragon 855 processor in the Note also powers a bunch of other Android phones, meaning it's not even a speed champ for Android — and the Apple-designed A12 processors in the iPhone XS and XS Max are even faster.

Once again, with Apple's home-field processor advantage, it laps the field. The A12 still leads, and there will undoubtedly be an A13 this fall that will expand Apple's lead. The iPhone maker still rules in terms of raw processor power.

Part of the core Galaxy Note identity is the S Pen, which makes the Note more than just another smartphone. The Galaxy Note 10 adds a few new S Pen features to the mix. This rubs salt in the wounds of those of us who have been hoping that Apple would finally embrace its inner nerd and slide a stubby, bowling-pencil-sized Apple Pencil into the company's pocket protector.

Apple's got all the pieces to do so, from an excellent stylus in the Apple Pencil to an operating system and app ecosystem that have had nearly five years to adapt to the concept of stylus input. And yet, to this point, the Pencil has remained an iPad-only feature. I'll grant you that using a stylus on a small screen feels a little silly. But some people would welcome the ability to make a quick sketch or handwrite a note on the iPhone XS Max's 6.5-inch screen.

People have been using finger-emulating styluses on the iPhone for years. It's time for Apple to support the real thing, whether it's a version of the Apple Pencil or something more like Logitech's Crayon, which works with all current iPad models, costs $50 and lacks some of the Apple Pencil's niceties. The Crayon fits great in a shirt pocket, too.

The Galaxy Note 10 models come with three rear cameras, as well as a front-facing shooter. Right now, the iPhone XS has only two cameras and the iPhone XR has only one, giving Samsung a (likely short-lived) advantage. But if the iPhone 11 rumors are true, Apple will catch up in this area come fall. Right now, all signs point to iPhone XS successors with three cameras on the back, while the iPhone XR will gain one additional lens.

Of course, camera hardware is only part of the conversation. It remains to be seen if Apple will introduce any snazzy new photography features driven by the company's processors and machine-learning algorithms.

Finally, the iPhone and the Galaxy Note have converged on one vital trend in late-2010s smartphones, namely the death of the headphone jack. Apple's decision to force users of classic, corded headphones to turn to a dongle got mocked at the time. But it turns out that the company was just providing cover for nearly every other electronics maker to give up on the old 3.5mm headphone jack.

As someone with a really nice pair of custom in-ear headphones, I still carry those dongles — Lightning for my iPhone and USB-C for my iPad Pro — with me whenever I travel. It's still ridiculous. But now that Samsung's on board with the dongle approach in the Galaxy Note 10, I suppose I'll see even more fellow travelers attaching adapters to their devices to use their old headphones.

Welcome, Galaxy Note fans. It's not so bad living in Dongletown.