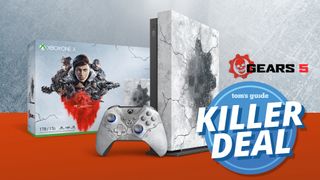 Best Buy currently has the Xbox One X Gears 5 Limited Edition bundle on sale for $349.99. When not on sale, this Xbox One X bundle would set you back $499.99, so that's $150 in savings. Even better, Best Buy is tossing in 3 free months of Xbox Live Gold (a $24.99 value). This is the lowest price we've seen for this Xbox One bundle and also one of the best Cyber Monday deals we've seen yet.

By comparison, this Xbox One X bundle $25 cheaper than Walmart's current price, and that's without the Xbox Live Gold bonus.

Gears 5, which is exclusive to Xbox One and PC, is a big, beautiful, and bold third-person shooter game with a wealth of interesting multiplayer options. The Xbox One X delivers immersive gaming in 4K and UHD 4K Blu-ray support, and is the most powerful console you can currently buy.

If you're looking for an Xbox One X bundle, you can't go wrong with a Limited Edition console. Not only is it a collector's item perfect for Gears diehards, it will also likely appreciate in value over time.