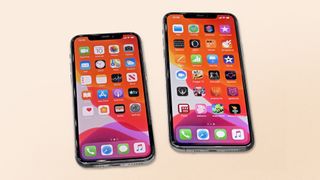 When the iPhone 12 ships next fall, it's almost certain to have a more powerful processor, as chipset upgrades have become a staple of Apple's iPhone rollouts. And according to one analyst, that processor is going to be bolstered by more memory than Apple's ever put in one of its smartphones.

That's the word from Barclays analyst Blayne Curtis after a trip to Asia to meet with the companies in Apple's supply chain. In a research report spotted by MacRumors, Curtis says the Pro versions of Apple's iPhone 12 will come with 6GB of RAM.

The same report says that both the iPhone 12 Pro and iPhone 12 Pro Max will have rear-facing 3D sensing cameras and mmWave support for high-performance 5G connectivity.

Apple doesn't announce how much memory it packs into iPhones, but teardowns and regulatory filings reveal the amount of RAM. In the case of the iPhone 11 Pro and iPhone 11 Pro Max, that level turned out to be 4GB, so a 6GB iPhone 12 would be a bit of a step up, even if it doesn't quite match the 8GB of RAM included in the Galaxy Note 10 or OnePlus 7T.

Still, extra RAM should help the next iPhone switch between apps with even greater speed, and it can't help but goose the already impressive performance delivered by Apple's phones. The A13 Bionic processor inside the current iPhone 11 lineup is already the fastest mobile chipset around based on benchmarks so this only points to good things for the A14 processor (or whatever Apple calls it) in next year's phones.

As for the successor to the iPhone 11, it's expected to have 4GB of RAM — the same amount currently found in Apple's 6.1-inch phone.

Curtis' report includes one other notable detail about Apple's smartphone plans, though it has nothing to do with the iPhone 12. Instead, if you're holding out hope for a successor the iPhone SE, Curtis offers some good news, claiming that production on that device will start in February.

Rumors about an iPhone SE 2 have picked up recently, with the most common assumption being that the phone would adopt the form factor of the 4.7-inch iPhone 8. The new iPhone SE could also feature an A13 Bionic chipset. It's assumed the new phone would ship sometime in the first quarter of 2020, so Curtis' claim that production will begin in February fits in with that timeline.