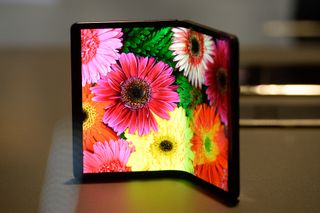 Tech companies have yet to perfect phones that fold once, though that evidently hasn't stopped TCL from experimenting with a handset that folds twice.

The Chinese firm's latest DragonHinge concept, revealed by CNET, highlights one possible avenue TCL could take as it prepares its first foldable. The company has actively participated in the development of bendable display for some time, showing off a number of concepts at Mobile World Congress earlier this year that expanded vertically as well as horizontally.

The hardware in CNET's hands-on doesn't have a working screen, so it's more of a design study than a legitimate prototype. Still, it serves to explore the value in a device that can assume a variety of form factors.

In its most compact state, this TCL concept takes an "S" style accordion shape. When folded out, you'd theoretically be able to decide how much display you want — either two-thirds of the overall width, or you could use the full, 10-inch panel in all its glory. There's also a quartet of cameras on the back, though that might actually be the most ordinary thing about the whole package.

The fact that the display bends in different directions at each joint seems like cause for concern. Foldable phones are obviously far from durable at this juncture, and if a user were to accidentally bend one of the segments in the wrong direction, the consequences would probably be dire.

Additionally, we couldn't help but notice many, many ripples on the plastic screen surface at those articulation points, judging from CNET's video. If you couldn't unsee the crease running down the Galaxy Fold's screen, you probably won't be satisfied with this one.

Of course, TCL's DragonHinge technology is very much a work in progress right now. When the company does eventually release a foldable — as it seems very eager to do, given its enthusiasm in producing all these design studies — it might not take this tri-fold shape. It could be something akin to the long-rumored Motorola Razr that we'll finally see in the flesh on November 13, and more comparable to the flip phones of old.

Whatever design TCL ends up green-lighting, we may not have to wait long before we see it hit the market. In February, TCL told us it was eyeing a 2020 launch for its first foldable. That might all depend on how the market reacts to the Galaxy Fold, Razr and Huawei's Mate X. But if reception is positive, you can count on TCL to show up to the party.