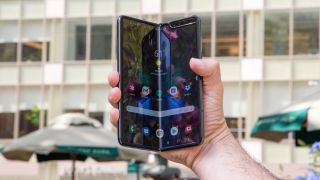 Foldable phones are probably about to get even higher prices. I say this because Samsung's already found a new feature that could raise the Galaxy Fold 2's cost beyond the original's $2,000 price: glass screens.

This rumor originates from phone leaker @UniverseIce, who tweeted a previously-leaked image of the Galaxy Fold 2 and the claim that Samsung "will use an ultra-thin glass cover for the first time in the world, replacing plastic materials."

It can be confirmed that the Galaxy Fold2 leaked not long ago will use an ultra-thin glass cover for the first time in the world, replacing plastic materials. The screen looks flatter and has less wrinkles. In fact, this is the correct cover material for foldable phones. pic.twitter.com/BS73BCsA4NDecember 24, 2019

While this concept — a foldable glass panel — made me worry about picking shards out of my fingertips, it's actually going to fix one of the biggest issues with the original Fold. @UniverseIce notes that the Fold 2's "screen looks flatter and has less wrinkles."

That's the kind of statement that makes me wonder how Samsung had the bravado to release the original Fold when its screen had wrinkles. (Or at least, a noticeable crease down the middle that really stands out when you'r using an app with a white background.) Further, shouldn't this fix take away all of the wrinkles, and not just smooth some out?

Wondering how reliable @UniverseIce is? Engadget notes this account has a decent track record, scooping the gesture-based controls for the Pixel 4, among other notable leaks.

The photo included in @UniverseIce's tweet came from a previous Galaxy Fold 2 leak by Weibo user Wang Benhong. It shows off a design that looks like the Motorola Razr, which was supposed to arrive in January, but that's now delayed. (Motorola says it's because of higher than expected interest in that foldable flip phone.)

Will that cool name, and flatter screen, be enough to get the public excited to spend even more thousands on the Galaxy Fold 2? Or will foldable phones continue to be a nice idea that's never really embraced by the phone-buying public?