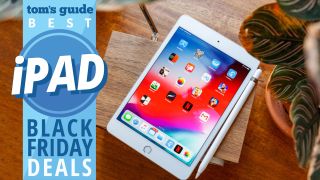 We've always liked Apple's tablets, but this year's iPadOS release made them a lot better. That being said, the best Black Friday iPad deals keep getting better even though Black Friday itself is technically over.

Most people will want to start with the 10.2-inch iPad, which is down to $229, which is the all-time low for the tablet. Yes, even though many thought $249 was the floor for this Editor's Choice pick, it's now $20 cheaper. Meanwhile, there's a $52 discount on the iPad Air, bringing it to $597 at Amazon.

Want more power, a better stylus or a bigger screen? You want one of Apple's iPad Pro tablets. The best deal here is the 11-inch iPad Pro (256GB), on sale for just $799 (again, see below) on Amazon, which is $149 off. We've also found great sales on iPad accessories, including the Apple Pencils and Smart Keyboards.

Apple 10.2-inch iPad: was $329 now $229 @ Amazon
The best entry-level iPad price of Black Friday weekend: Apple's most popular iPad just got $20 cheaper. You won't see this all time low price, though, if you look at the Silver model, only the Space Gray and Gold have it last we checked. So, not only does it sport a bigger screen, and support for Apple's Smart Keyboard, but you're now saving $100 over the list price — which Apple is still charging.View Deal

iPad 10.2" (LTE|32GB): was $459 now $380 @ Amazon
For everyone tired of hunting for a Wi-Fi network, look at the latest entry-level iPad's cellular LTE option. It's currently discounted by $79, but only in the Space Gray design. The Silver and Gold colorways are $40 off, and let's be honest, both of those are the lesser color options here.View Deal

Apple iPad Mini (256GB/LTE): was $679 now $639 @ Amazon
When a Max-sized iPhone isn't big enough, you can still save on Apple's smallest iPad. Amazon's taking $40 off this high-capacity model, which also has cellular connectivity.View Deal

Apple iPad Air (64GB/LTE): was $629 now $599 @ Amazon
Thanks to its speedy As12 Bionic CPU, the iPad Air is one of Apple's most powerful tablets. This model comes with built-in cellular connectivity, making it an even more powerful, always-connected tablet. The Space Gray model is $30 off at Amazon. View Deal

For those who already own an iPad that they really like as-is (they last forever), we've found some pretty great deals on accessories for Apple's tablets. These include savings on keyboard folio cases and Apple's 2nd Gen. Pencil stylus.

Apple 2-meter USB-C Charge Cable: was $35 now $14 @ Amazon
Some folks just think that Apple's charging cables are better than the rest. If they're trying to charge their iPad Pro (or MacBook) as fast as possible, we've found a 60% off deal on Apple's own 2-meter USB-C charging cable. View Deal

Logitech Crayon Digital Pencil for iPad was $69 now $49 @ Amazon
If you avoided buying an Apple Pencil stylus because it was so expensive, Logitech and Amazon have teamed up to create (and discount) a viable alternative. Reviews say that the accessory offers similarly low latency as the Apple Pencil, so you won't need to worry about lag time between the Crayon's tip being pressed against your iPad and its doodling showing up on your screen.View Deal

Smart Keyboard Folio for iPad Pro was $179 now $161 @ Amazon
Apple's own iPad Pro keyboard case is the easiest to use option available, and it's quite thin, so it doesn't add much bulk on the go. The uber-retailer is discounting both sizes, so the 11-inch iPad Pro folio is $161 and the 12.9-inch Folio is $180.View Deal

Brydge Pro Wireless Keyboard: was $169 now $99 @ Amazon
But what if you want a more traditional keyboard? I really dig this version of the accessory because the keys are a lot more like the traditional keys on a real laptop, with more vertical travel and feedback. View Deal

Apple Pencil (2nd Generation): was $129 now $119 @ Amazon
By adding a flat edge and magnetic charging, Apple fixed the biggest issues with its stylus. Its low latency already made it a great method for writing and drawing in the creative apps found all around the iOS app store.View Deal

Apple Pencil (1st Generation): was $99 now $79 @ Amazon
If your iPad isn't a 2018 iPad Pro, this is the Stylus you want. Not only is it cheaper, but it actually charges with your iPad, in the Lightning port.View Deal

Apple 30W USB-C Power Adapter: was $47 now $35 @ Amazon
Just like with the above power cable, some folks only want to charge their iPad Pro with an Apple-made USB-C power adapter. This 30-watt brick will make it easier to refuel your USB-C devices.View Deal

What about iPad Black Friday deals from the Apple Store

Yet again, you probably didn't have any reason to shop for iPad Black Friday deals at an Apple Store. For Black Friday 2019, Apple has been giving away gift cards "of up to $200" in value, but we're not expecting that high a deal for an iPad purchase. When Apple did this same sort of offer last Black Friday, they were giving out $25 (or slightly higher) Apple gift cards when you bought an iPad. You're better off with the great discounts (from $50 to $300 off) mentioned above at retailers like Amazon, Walmart or Best Buy.