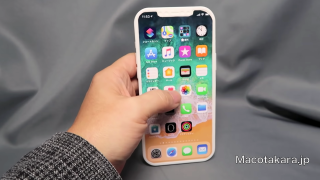 We'd like to say iPhone rumor season is ramping up, but let's be honest — it never ends to begin with.

There's maybe a brief lull about a couple weeks long immediately after the latest models release in the fall, and then we're right back into the thick of it, trying to separate legitimate leaks from bizarre 3D-printed contraptions. Like this supposed iPhone 12 case template you see here, courtesy of Japanese blog Macotakara by way of 9to5Mac.

Macotakara is usually quite credible, though the site supposedly procured this mockup from Alibaba, which instills — how do we put this — the opposite of confidence. The case does echo a few of the design elements we expect to see expressed in the iPhone 12 series; the sides are flat with sharp corners, for example, like those on the iPhone 4 and 5. However, it's quite easy these days to whip up a plastic printed iPhone with oft-rumored design cues and parade it around as a prototype accessory, so we're not investing much stock into this one.

There's also the issue of size to be mindful of. For the most part, we've heard the iPhone 12 will be offered in three form factors — 5.4 inches, 6.1 inches and 6.7 inches. (There's also an extra-small iPhone SE 2 potentially waiting in the wings, but that's a separate rumored phone release.) The mockup seen here, on the other hand, measures 6.5 inches from corner to corner, just like the existing iPhone 11 Pro Max.

There are also a pair of oblong cutouts on the left and right edges for what 9to5Mac and Macotakara theorize may be iPad Pro-style smart connectors. That's a detail that hasn't really been swirling around the rumor mill as of late, which makes us even more skeptical. (Perhaps one of them denotes the placement of the SIM card slot, though that's not something most cases provide access to.)

Could aspects of this mysterious mockup be accurate? Perhaps. That said, it seems like it wasn't constructed with more information than what's already been making the rounds online, so we'll comfortably hold our breath for the next sketchy-looking iPhone dummy that pops up.