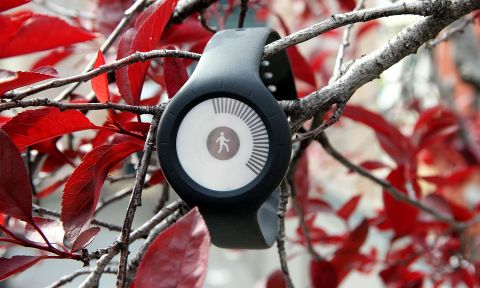 The E Ink display on the inexpensive Withings Go lets you quickly see how close you are to meeting your day’s goals.

If you’re just getting up off the couch, and not sure about this whole “exercise” thing, you probably don’t want to invest a whole lot in a fitness tracker. The Withings Go ($69) is a low-risk, high-reward device that will track your steps, sleep, swimming, and calorie count, and can double as a watch with its E Ink display. Coupled with Withings’ excellent app, which also lets you track your weight and diet, the Go is a fun and compelling gadget.

This is as simple as it gets. Similar to the Jawbone Up Move and Misfit Flash (both of which cost around $30), the Withings Go is a small plastic disk, but the front of the Go has an E Ink display, unlike the tiny LEDs on the Up Move and Flash. It’s a basic design, but it works.

By default, the Go displays how far you are toward completing your daily step goal (small tick marks slowly fill up the screen). If you press on the middle of the display, the view changes briefly to show the time. I wish there were a way for it to constantly show the time, but you can’t have everything in a $70 device. I found it slightly annoying that I could faintly see the minute and second hands, even after the display had switched back to step tracking.

At 1.4 inches in diameter and 0.4 inches thick, the Go is a little bit larger than a quarter, and can be worn either on your wrist or on your belt. However, it will only track sleep and swimming if it’s set to the wrist mode (which you access through Withings’ app).

Included with the Go are a black rubber wristband and a black plastic belt clip; the wristband made the Go feel like a kid’s Swatch from the '80s. The Go will also be offered with belt clips and a green, yellow, red or blue wristband.

The Go is water-resistant to 50 meters (about 165 feet), which is the same as the Misfit Flash and Misfit Shine, but beats out the merely splash-proof Up Move.

The Go automatically tracks your walk, run, swim, sleep and calorie count. As you walk, the Go’s screen fills with little tick marks, indicating how far you have to go to reach that day’s goal.

Since the Go’s screen doesn’t show your exact step count, you have to look at the app on your smartphone (Android and iOS) to see just how far you’ve gone. Still, it was reasonably accurate, and was within a few steps of the 500 paces that I had counted out.

Sleep tracking was also mostly on the mark, although close to my actual bedtime, it mistook me sitting on the couch, watching TV, as sleep. Unfortunately, it’s not easy to edit your sleep time, as you can with Garmin’s fitness trackers.

Withings’ app is elegantly laid out, and presents all your information in an easy-to-ready and friendly manner.

A "Dashboard" separates your overall health into four cloverleaf quadrants that represent Activity, Weight, Sleep and Heart. As you complete the requirements for each quadrant — such as walking the required number of steps or getting enough sleep — the quadrant will fill with color.

Another page in the app shows a timeline of your activity broken down by day; you can drill into each to get more detailed information.

As you complete various activities, such as walking a certain number of miles, you earn badges in the app. For example, earning the Suez Canal badge means you’ve walked 200 kilometers — approximately the length of the canal. It’s a fun way to visualize your progress.

While Withings’ app doesn’t have diet tracking natively built in, you can connect it to MyFitnessPal to record your daily intake of food. You can also link the Withings app to Runkeeper, Nike+ and the Nest Learning Thermostat. The latter is only useful, however, if you have the Withings Aura ($189), an alarm clock with a color-changing LED that helps you wake up more gently. Via the Withings app, the Aura will automatically set the Nest thermostat to the preferred temperature when you go to sleep.

You can also connect the app with Withings’ Smart Body analyzer, which topped our list of favorite smart scales.

The coin-cell battery in the Withings Go will last up to 8 months on a charge. To replace it, simply twist off the back of the Go and swap out the battery.

The $70 Withings Go is an interesting new entry into the budget fitness tracker market. Its standout feature is its E Ink display, which is bright and bold, and Withings’ app integrates well with its other products, such as the Smart Body Analyzer.

However, there’s a lot of competition in this price range. The first-generation Misfit Shine, for instance, is now just $60, made of a sleeker aluminum, and it lets you control your phone’s camera or smart home devices. The $29 Misfit Flash does all the same things, but it's in a plastic body.

The Withings Go is a solid budget fitness tracker, but it’s worth investigating other options.