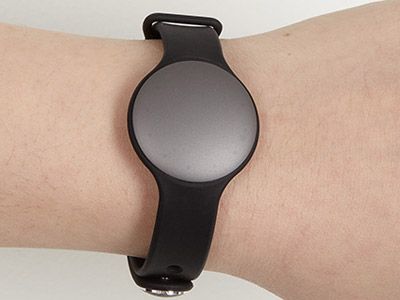 Those looking for a minimalist fitness-tracking device will like the Misfit Shine's design.

The quantified-self trend has never been more apparent than with fitness tracking devices. But while there are an increasing number of these gadgets on the market, they naturally all look fairly sporty. Enter the Misfit Shine. This sleek and sexy quarter-sized tracker looks equally at home in the gym or on a night out on the town. However, this style comes at the expense of some functionality. Find out if this tracker is worth wearing.

Editor's Note (5/9/16): We have updated this review to reflect the fact that the Shine syncs with third-party apps such as MapMyFitness, as well as smart home devices. We have also increased its rating to 8 stars.

The Misfit Shine is the most understated and stylish fitness tracker we've seen. For one thing, this small, quarter-sized aluminum disk doesn't look like a fitness band, but rather like some modernist watch you'd find for sale at the MoMA gift shop. Available in nine colors including Gray, Black, Champagne or Topaz, it more closely resembles a piece of jewelry than something you'll get sweaty with.

MORE: 10 Fitness Apps to Help You Shape Up

Arrayed around the outer edge of the Shine are 12 tiny, white LED lights that you won't notice until you tap on the Shine itself. These lights show, at a glance, the time of day and how far you are from completing your daily fitness goals.

At 0.33 ounces, the Shine is far lighter than almost every other fitness tracker available (the Withings Pulse is a hair lighter, at 0.28 ounces). We barely noticed the Shine on our wrist, even when sleeping. The Shine is water resistant to 50 meters, so you can use it while in the shower or while swimming, although you'll want to pick up the Speedo Shine ($79) if you also want to track your laps in the pool.

The small metal disk, which measures 1.08 inches in diameter and 0.13 inches thick, can be attached to a black rubber wristband or a rubber clasp, if you want to wear the Shine somewhere other than your wrist. Optional accessories include a leather wristband (brown or black, $49) or a necklace with a metal pendant ($49).

Instead of a rechargeable battery, the Shine uses a large coin cell battery (included) that the company says will last about four months. To insert the battery, you must pop off the back of the Shine using an included tool, then snap the covering back into place.

Next, you pair the Shine with Misfit's free app for iOS or Android devices. However, since the Shine uses Bluetooth 4.0 LE, the fitness tracker works with a limited number of devices. Compatible Android phones include the Nexus 4 or 5, Samsung Galaxy S4 or Samsung Galaxy Note 3. The compatible iOS devices include the iPhone 4S or later, iPod touch 5th gen or later, iPad 3rd gen or later and the iPad mini.

As soon as you open the Shine app on your phone, the device will automatically pair and sync its data. The main part of the screen has a big circle that, like the device, fills up to show close you are to meeting your goals for the week. Tap in the center of the circle, and it shows how many steps, calories and miles you've covered.

Below the circle is a graph that charts your activity by day. Pull up on this tab, and it displays how close you came each day to meeting your goals, with little squares showing each activity you participated in during the day. These can include "Pretty Active" to "Sorta Active" to "Sleep." If you meet or beat your goals, a little trophy appears on the graph, as well as a turquoise square congratulating you on your achievement.

At the top of the display are tabs that let you set goals and share your progress with other Shine users (you can keep your stats hidden from others if you wish). We like that the app shows quirky messages when users meet or exceed their goals, such as "Cue the 'Rocky' music!" You can also share your achievements via Facebook.

As with the device itself, Shine's app provides a good general overview of how active you are during the day, but doesn't offer as granular a look at your movements as the Fitbit Force or Withings Pulse.

Misfit also lets you sync data gathered from the Shine with some of the most popular fitness apps including MyFitnessPal, RunKeeper, Lose It! and MapMyFitness, so you can also add diet tracking to your fitness regimen. You can also connect it with the Walgreens app, and earn points for walking a certain number of steps.

The Shine also works with some of our favorite smart home devices, such as the Nest Learning Thermostat and IFTTT. So, for example, when the Shine senses that you've gone to sleep, it will automatically tell the Nest to set the temperature to sleep mode.

The Misfit Shine tracks your steps, calories and distance, the bare minimum for fitness devices these days. The Withings Pulse, by comparison, also tracks your heart rate, and the Fitbit Force measures how many stairs you've climbed.

Tap on the Shine twice, and its LEDs will first light up to show how much progress you've made towards your fitness goals — the more LEDs that light up, the closer you are to completing those goals. Then, the Shine will show you the time: The light that corresponds to the hour will stay lit, while the light that corresponds to the minute will blink. Since there are only 12 lights, the Shine only shows the time in five-minute increments. You can set the Shine to show the time first, if you so prefer.

While we really liked the minimalist approach to the Shine's interface, it's not the most practical if you want to know the time or exactly how many steps you've taken. Other devices with more traditional displays, such as the Withings Pulse, let you see more information at a glance, such as steps and distance.

The Shine was a little generous when it came to tracking our activity. A 1.29-mile stroll as measured by MapMyRun on an iPhone 5s came out to 1.7 miles on the Shine. That's a bit worse than other wearable fitness trackers that rely solely on an accelerometer. When we originally tested it, the Withings Pulse was accurate to one-tenth of a mile.

Tap on the Shine three times, and all of the lights will turn on in sequence, then go dark, indicating that the device is now in sleep-tracking mode.

When you wake up, simply tap on the device three times again, and the Shine will exit sleep tracking. It's not as seamless as the Basis B1 Band, which will automatically enter sleep mode. However, most other trackers, such as the Fitbit Force, also require you to tap something. As with other bands, the Shine tracks how much time you spend in deep sleep as opposed to light sleep; it was surprising for us to see how much time we spent tossing and turning.

The Misfit Shine is a very good fitness tracker for those who don't want to look like they're wearing one. While it doesn't monitor your heart rate, it can integrate with smart home products as well as third-party fitness apps. If you don't mind spending a bit more, the $99 Shine 2 has an even slimmer 8mm profile and includes a vibrating alarm and call and text notifications, but the original Shine is well suited for those who want a general look at their overall sleep and fitness activity, and want to look good doing it.