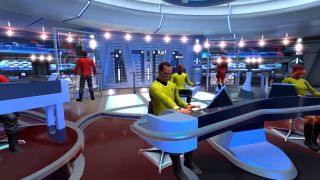 LOS ANGELES — Equally likely to churn out sequel after sequel or try something incredibly bold and new, most of Ubisoft's E3 conferences have been a mix between the familiar and the unexpected. While the developer's roster this year was mostly on the predictable side, most of the ongoing series look fine, and one big surprise is sure to make almost every sci-fi fan happy.

Ubisoft hasn’t done much work with the Star Trek franchise lately, which is why it was such a pleasant surprise when Levar Burton (Geordi La Forge), Jeri Ryan (Seven of Nine) and Karl Urban (reboot Dr. McCoy) showed up in a video wearing VR headsets. Ubisoft is developing Star Trek: Bridge Crew: a four-player immersive experience that requires a captain to command three crewmembers on dangerous and daring Starfleet missions. This is as close as we can get to the fantasy of commanding the Enterprise (and every Star Trek fan has had that fantasy), so it’s hard not to be excited about this one.

We’ve known there’s an Assassin’s Creed movie on the way, and even seen a few trailers for it. What’s surprising is that it still looks quite good. The film stars Michael Fassbender (Magneto in the recent X-Men films) as a man who relives his ancestor’s genetic memories, just like the game series’ protagonists. Between parkour, stealth, sword fights and jumps that would probably kill you in real life, the film looks faithful to its inspiration. Fans should remember, too, that Ubisoft was also behind the Prince of Persia film which, while nothing special, is still miles ahead of most video game movies.

There’s something to be said for offensive comedy, so long as everyone is getting an equal share of the abuse. South Park: The Fractured But Whole (say it out loud; you’ll get it) picks up where The Stick of Truth left off, and has something obscene, and obscenely funny, to say about almost everyone. You’ll take on the role of the New Kid in a cartoonish action/role-playing game, but this time, the game lampoons superhero stories instead of fantasy tropes. With hilarious voice work, great animation and lots of customization, this is a no-brainer for fans of the show.

Watch Dogs was an ambitious game, but the final product wasn’t everything it could have been. The sequel sets out to solve these problems, featuring a protagonist with an actual personality and more nuanced hacking options. This open-world game casts you as a hacktivist in San Francisco, where the contrast between rich and poor is both striking and stark. Once again, controlling the city through creative hacks is at the center of the game, but this time, you have many more tools at your disposal, including flying drones, RC jumpers and a whole network of like-minded hackers.

Last year, we checked out For Honor’s ambitious multiplayer, which features a deep swordfighting system, dependent on directional attacks and blocks. As it turns out, the game will have a traditional campaign as well, which pits Western European knights, Japanese samurai and Scandinavian Vikings against one another. Interestingly, the three warrior groups don’t want to fight, but are rather continually compelled to by a goddess called Apoleon. Each faction has a unique storyline, which will all presumably link up at some point. As pitches for new franchises go, we’ve definitely heard worse, and it has some good gameplay to back it up.

Fans of online shooters seemed to love Tom Clancy’s The Division at first, then started bowing out once they saw all the content there was to see. Lapsed fans may soon have reason to check in, and newer fans, to jump in. The Division is getting two new expansions over the next few months, each one replete with missions to complete and equipment to collect. The Underground, due out this summer, will take players into the dangerous subway tunnels of post-apocalyptic NYC. The Survival add-on tells the story of a bleak winter where supplies run low and tempers run high.

While open-world games and extreme winter sports may not seem like the most logical combination, Ubisoft CEO Yves Guillemot seems pretty confident that it will not only work, but be one of the next big trends in gaming. In Steep, players can explore the French Alps and ski, snowboard, paraglide or base-jump without ever having to leave their homes. Tackling the slopes on your own is possible, but it’s better to do it with friends, both to compete and see how their replays stack up to your own. Each location is as close to its real-world equivalent as possible, including the towering Mont Blanc.

Ubisoft discussed a handful of other games, like the oddball Trials of the Blood Dragon and the competitive VR sim Eagle Flight, but these were the most interesting games on display. Which one gets your game finger twitching? We’ll have more info on them as we cover E3 in more detail.