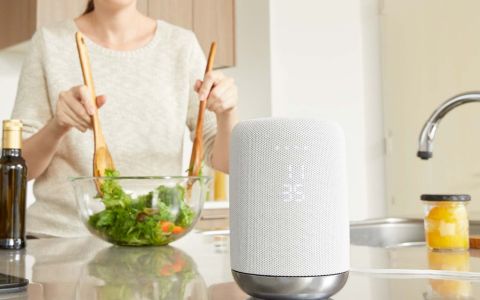 The Sony LF-S50G brings Google Assistant to your home with an elegant style and includes some useful features.

All speakers with Google Assistant can deliver smart-speaker basics, like playing music and managing smart-home devices. It's the other things that matter, and Sony attempts to set itself apart with its $199 LF-S50G. In addition to an elegant aesthetic, the speaker includes an LED display the shows the time, offers touch-free gesture control and resists splashes of water. But are those enough to make it stand out as one of the best smart speakers out there?

Looking a bit like a skinnier version of the Apple HomePod, the 6.4 x 4.3-inch LF-S50G comes in black or white. Its simple yet elegant design will fit well in almost any home setting without drawing much attention. The unit houses a 1.9-inch driver and a 2.1-inch subwoofer.

The front of the speaker includes an LED display that shows the time and also indicates the volume level when you change it. The clock is a nice touch that other smart speakers could benefit from, though it would be nice to have an option to turn it off. Four lights above the time pulse when Google Assistant is listening.

The LF-S50G features just one button on the bottom, which mutes the microphone. You can control playback and other functions through Google Assistant, or try your luck with touch-free gesture control.

Wave you hand across the top to play or pause; circle clockwise to raise the volume. Other gestures let you activate Google Assistant, change the volume or skip tracks. However, the unit's responsiveness varied; sometimes the gestures worked, but most often they did not. Other reviewers had similar issues getting gesture controls to work consistently.

The LF-S50G is IPX-3 water resistant, another nice feature that most smart speakers lack. That means it can get splashed without fear of it frying its circuits — handy if you plan to place the unit in the kitchen. I ran it under a faucet for a few seconds and the unit continued to work without issue. However, JBL's Link 10 and Link 20 speakers are both IPX7-rated, meaning they can be submerged in water for up to 30 minutes without sustaining any harm.

Google Assistant was responsive to commands from across the room, thanks to the two microphones on top of the unit. It played music from Spotify and a radio station from TuneIn, started an episode of Jessica Jones on a Chromecast and turned on a Wemo Switch.

But, like other third-party speakers with Google Assistant, the LF-S50G can't make calls yet.

The LF-S50G provides good overall sound, with balanced treble and bass. Audio was slightly better than a $129 Google Home, but nowhere near as good as Onkyo's $199 Smart Speaker G3.

The Weeknd's vocals on "Pray for Me" were clear above the throbbing bass, and sounded  fuller than on the Google Home, but the bass was less detailed than on the Onkyo G3. Similarly, the bass on the Decemberists' "Severed" sounded muddy on the LF-S50G, while the vocals and keyboards were sharp. The horns on Miles Davis' "Summertime" were warm and crisp, but the acoustic bass lacked depth.

The LF-S50G gets very loud, maxing out at about 96 decibels. That's comparable to Onkyo's G3, and enough volume to easily fill a large room.

As with other Google Assistant speakers, you set up the LF-S50G through the Google Home app. It uses your Wi-Fi network for internet connectivity and supports both 5- and 2.4-GHz networks. You can also pair it with your phone via Bluetooth, which is useful if your streaming service of choice is Apple Music (not supported by Google Assistant).

Sony's LF-S50G is an interesting alternative to the Google Home. It delivers better sound and a few useful features that the Home doesn't, like a clock and water resistance. However, its gesture controls were too inconsistent.

If you can live without making calls through your smart speaker, the LF-S50G is a better choice than the Google Home. But if sound quality matters, Onkyo's Smart Speaker G3 or JBL's Link 20 both offer better bass and overall fidelity for the same price.