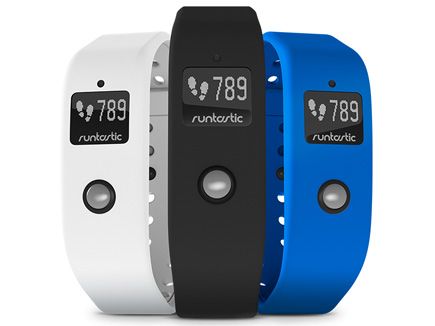 The Runtastic Orbit is an easy-to-use fitness tracker that also keeps tabs on your sleep, but it doesn't do enough to stand out.

Fitness bands have really hit their stride, with everyone from Adidas to Sketchers offering their own devices in an attempt to win over consumers' wrists. Now, app makers such as Runtastic are developing hardware as a way to extend their brand. But does the $119 Orbit have what it takes to stand out in an already crowded field?

Now that we're well into the second and third generation of fitness bands, I was a bit disappointed in the Runtastic Orbit's design. It's not as thin as the Jawbone Up24 or as stylish as the Misfit Shine. It's just sort of … meh.

The Orbit comes with blue and black wristbands, as well as a black belt clip. If you want to add a splash of color, Runtastic sells two different three packs of wristbands for $30 each. One pack has orange, yellow and red bands, and the other pack has green, white and slate bands.

Like the Fitbit Flex, the guts of the Orbit are a small plastic dongle that's inserted into the soft plastic wristband. The front of the device has a small, square, black-and-white display. Below that is a silver button, which lets you cycle through the time, steps, calories burned, active minutes and sleep time.

The Orbit is waterproof in water depths of up to 300 feet. The company says the device is good for swimming and showering, but not scuba diving.

There are about as many Runtastic apps as there are Angry Birds sequels. By my count, there were 32 fitness or health apps in the iOS store, some of which can also be used with the Orbit. It's a bit confusing, but the one made specifically for the Orbit is Runtastic Me.

After downloading the correct app, entering my vitals (age, weight and height) and pairing the Orbit with my phone, I was off and running.

Though the Orbit's hardware is middling, I really liked the Runtastic Me app. It's simple and intuitive, and puts all the information you're looking for up front.

The top third of the screen has your profile picture (if you upload one) in a circle; a ring around your mug shows how far you are toward meeting the day's goals. It starts off red, then turns orange and finally to green the closer you get to your goal.

Below, your metrics are shown individually: Steps, Active Minutes, Calories Burned, Distance and Sleep. Select any one, and the screen changes to show when during the day you were active.

Orbit users can also sync the band with the generic Runtastic app. Although none of Runtastic's apps has diet tracking, the Orbit can also be synced with MyFitnessPal, which does offer diet tracking.

Like most fitness bands that use an accelerometer to measure distance, I found the Runtastic Orbit to be as accurate as its competitors. It logged a 6-mile run (as recorded by the TomTom Runner Cardio GPS watch) as 5.8 miles, which is as good as you're going to get with a fitness tracker.

Unlike the Up24, the Orbit lacks a calibration feature to make sure it's accurately recording your movements.

How'd you sleep? You can tell with the Orbit, which measures the quality of your rest by tracking how much you move during the night. The charts it produces are every bit as colorful as you'll find on Jawbone's, and differentiate between heavy and light sleep, and when you were awake.

If your alarm clock isn't doing the trick, you can also set the Orbit to gently buzz to get you up. It can also be set to buzz if it detects you haven't moved in a while.

Just above the Orbit's display is a small sensor that does little more than track how much ambient light it picks up during the day. The results show up along the bottom of the Runtastic Me app.

At the moment, this feature is not very useful. For example, there's no metric that shows how light is calculated or if you've been out in the sun too long. However, a company representative said that Runtastic is looking to integrate it into additional features down the road.

Runtastic estimates that the Orbit's battery should last about a week. I wore it continuously for five days before it needed to be recharged. Annoyingly, you can't see how much battery life is left on the device itself until it's low. While the app includes a battery gauge, it only gives you a general indication of how much juice is left.

The Orbit recharges using a proprietary USB cable that attaches via magnets to two contacts on the underside of the device.

I really wish Runtastic had further developed the ambient-light-sensor capabilities of the Orbit before releasing the device. As it stands, the $119 Orbit has a good app and a bland design, but at least you can dress it up with a colorful band. Though it lacks a display, the $136 Up24 has better social integration, as well as diet tracking, and offers more sophisticated insights into your daily habits. If you're a big fan of Runtastic's other apps, the Orbit is worth a look, but right now, this band doesn't set itself apart.