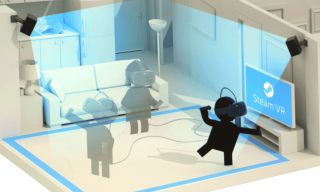 Valve is in a sharing mood. According to Engadget, the gaming giant is bringing some of its Chaperone safety features to the Oculus Rift. Announced at the Vision VR/AR Summit, Chaperone will give Rift wearers the ability to plot out a 10-foot box in the room and create virtual walls to keep them from walking into something and having an unfortunate accident.

If you're unfamiliar with Chaperone, it's a cache of features including room tracking and mura correction, which delivers better detail. Together, these features create a grid overlay that pops up when you're about to run into a wall or some other obstruction. It also uses the front camera and positional tracking software to show real-world objects in a virtual space.

Since Oculus Rift lacks a camera, it won't have the ability to see objects in the real world. However, once the Oculus Touch controllers become available, Valve will build support for wearers to define their space. There's no clear timeline on when that will happen.

However, Valve's willingness to support competing VR headsets is good for the burgeoning virtual reality industry. Considering that Valve and Oculus are two of gaming's biggest names, an open collaboration between the two can only benefit gamers.