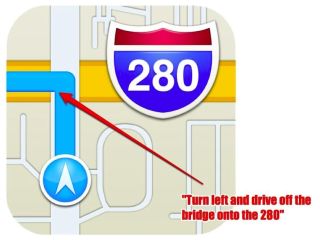 There's nothing more stressful than having to navigate through unnamed territory. In the old days, we had maps planted in front of our faces, with one eye on the flapping oversized paper and one eye pointed out the windshield. Now physical maps have been replaced by smartphones, tablets and GPS devices, but they still don't make life that much easier, especially when they lead you right into the middle of an airport runway.

That's the drawback of turn-by-turn directions: they may not always be right on the money. At times, these services seem rather idiotic, especially to those who are extremely familiar with the area in question, and know there's a much faster way to get from point A to point B. At times it's as if the turn-by-turn service is paid to steer you wrong.

MORE: iPhone 5S vs Samsung Galaxy S4: What Should You Buy?

Regardless, we trust that turn-by-turn navigation services will steer us safely to our destination granted we keep an eye on the road. The Alaska Dispatch reports that the iPhone's Map app has steered out-of-towners into harm's way at least twice in the last three weeks as they journeyed to the Fairbanks International Airport. Instead of directing them correctly through the airport's front gates, the Apple map service directed them directly across a runway.

What's incredible is that in both instances, the drivers had plenty of warnings that they were about to possibly cross into the path on an oncoming 737 or other aircraft, yet they remained glued to the turn-by-turn directions.

According to Angie Spear, marketing director for the airport, the iOS Map app directed both users to the access route that general aviation pilots use to get to the East Ramp, which is on the other side of the runway from the main airport terminal. The navigation ended by telling users to go to Taxiway Bravo, aka "Taxiway B" on the satellite map, but did not tell drivers to cross the main runway in-between.

Good thing they weren't directed to drive over a cliff.

"These folks drove past several signs. They even drove past a gate. None of that cued them that they did something inappropriate,” said Melissa Osborn, chief of operations at the Fairbanks Airport. Once the drivers reached the runway and saw the terminal on the other side, naturally they drove straight ahead and crossed the runway.

The first incident took place on September 6. The driver was using a rental car, and airport personnel, police and the TSA quickly converged on the iPhone owner as soon as he reached his destination. The airport staff complained through the attorney general’s office to Apple, and the fruity company's legal department confirmed that the issue had been corrected.

But it wasn't. Another driver crossed the runway again on September 20. Now the aircraft access route to Taxiway Bravo from the Float Pond Road has been closed until further notice. Apple followed up with a report that the issue would be resolved by Wednesday, but as of Tuesday afternoon, the iPhone app still directed users across the airport runway.

Osborn believes that the navigation system is using the center of the airport's physical property rather than the actual physical address, the latter of which doesn't steer people across a passenger plane's path. Based on looking up the address on our own iPhone, the Maps app pinpoints the destination near a body of water on the airport property, not the actual physical location of the terminal (seen above). Thus Apple's service is directing users to come in through the back and across the runway on the other side of the water. That said, the navigation issue seems to remain.

"It's all fun and games (mostly Hide and Seek) until somebody gets hurt," said Lisa Vaas from security firm Sophos. "Typically, Naked Security writes about information security, but in this most recent case of Apple Maps and the airport runway incidents, it's a case of disinformation leading to serious, tangible, real-world security issues. I don't mean to be a Google fangirl, but Apple, you've been wandering in the wilderness since you divorced Google Maps."

Apple's Maps app, which at one time was powered by Google Maps, has been on iOS since 2007 with the debut of the first iPhone. Apple parted ways with Google with the release of the Maps app back in September 2012.