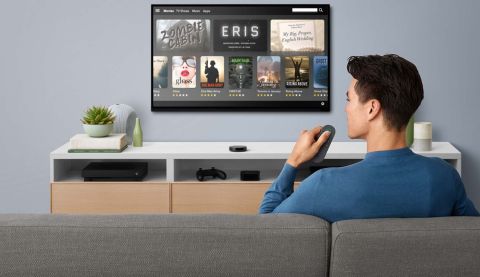 "Alexa, time to couch surf." Logitech's newest universal remote, the Harmony Express ($249), puts Alexa front and center. In an attempt to simplify your entertainment experience, the Harmony Express lets you — or, requires you to — use Amazon's voice assistant to turn on your TV, set-top box and streaming stick. But while Alexa has made controlling other smart home devices easier, using the assistant with the Express made watching TV anything but. Logitech makes some of the best universal remotes, but unfortunately, the Express doesn’t rise to their level.

The Harmony Express represents a pretty big change, stylistically and philosophically, from Logitech's larger, older universal remotes. Gone are the rows of buttons and touch screens. Instead, the Express looks more like something you'd get with a Roku or Fire TV.

At the top of the pill-shaped Express is a large circular button ringed with an LED, which turns blue when you press the button to summon Alexa. Surrounding this is a circular navigation pad.

Below that area are nine other navigation buttons: Back, Home, Menu, Fast Forward, Play/Pause, Reverse, Volume Up, Volume Down and Mute.

As a result, the Express is a lot smaller and lighter than previous Harmony models. At 2.2 ounces, it's less than half the weight of the Harmony Elite (5.8 ounces), and it's just 4.4 inches long, versus 6.3 for the Elite. I don't have the smallest hands, but it was nice that I didn't have to adjust my grip to reach all of the buttons on the Express, as I do with other remotes.

Similar to the Harmony Elite, the Express uses a hub to send commands to your various entertainment devices. It does so either via the cloud or through the included IR blaster. This means that you can stash the Express' hub in a closet, out of sight.

Unlike Logitech's other premium remotes, the Express does not come with a charging cradle. Rather, you have to plug this remote in via mini USB to charge it up. Still, you shouldn't have to do this as much, according to the company: once every few weeks, versus every few days as with its other remotes.

Getting a universal remote set up has never been the simplest process. You have to program the remote with all of your devices and their correct inputs, which can be a bit time-consuming. Logitech has smoothed the installation process for the Express as much as possible, but you will still need a good 15 to 20 minutes to get everything up and running.

When you launch the Harmony Express app (for Android and iOS) for the first time, it searches your network for all connected devices and has you manually enter nonconnected ones, such as older stereo receivers.

Afterward, you simply drag and drop icons representing your various devices (such as your cable box and streaming stick) to corresponding icons for your TV's inputs. You then tell the Express which devices you use when launching apps. I set up mine to launch Fire TV when I wanted to watch Netflix, for instance, but you can program the remote to launch other specific apps from other specific devices as well.

If you have a streaming stick, you'll need to perform some more setup on that end. For example, I had to install a Harmony Express app on my Fire TV and configure it to accept commands from the Harmony remote.

However, unlike its other hub-based remotes, you can’t use the Express app to control your devices once they’re set up. While I always considered this a fall-back in case my Elite’s battery went dead, it was a nice option.

The Harmony Express represents a different philosophy for TV watching. It assumes that its users mainly know what they want to watch or where they want to go before sitting down. So, for example, you can say, "Watch Netflix," and the Express will turn on your TV, streaming device and soundbar, putting them at the appropriate settings. From there, you can use the Express' navigation pad to get you to the show you want.

Once the Express learns your local cable or satellite provider (as part of the setup process), you can also say such commands as "Go to Channel 4" or "Go to NBC," and the remote will switch to those channels. Other commands let you fast-forward and rewind, change the volume, and go to your DVR.

And you can use the remote for non-TV-watching activities, too. Press the button on the Express, and you can use Alexa as you would any other Echo device: look up the weather and news, control smart home devices, and so on.

After the Express is set up, you can also use other Alexa devices to control your entertainment center. You could already do this with current Harmony remotes, but with the introduction of the Express, the functionality has been greatly expanded. However, to enable this, Logitech had to disable all Alexa/Harmony integrations, so current owners will have to re-enable the skill in the Alexa app.

The speaker in the Express is small but functional. Alexa's voice is loud but tinny; aside from controlling your TV, it's fine if you want to look up the weather, but I wouldn't use the digital assistant for much more than that with the remote. You can adjust the volume of the speaker via the Harmony Express app; before I figured this out, I was using a pillow to muffle Alexa’s voice.

Voice commands worked well, and the Express was responsive, but I had to be very specific when speaking. I couldn't say, "Watch TV," or "Watch Dish," when I wanted to tune in. Rather, the correct command is "Turn on TV" or "Turn on Dish." If you want to launch an app or tune to a channel, you have to start every command with either "Go to" or "Watch."

It was very frustrating that I had to remember to say the exact phrase. More than once, Alexa responded, "I couldn't find a skill," or, "I'm sorry," when I said the wrong thing. Many times, I would say “Dish TV” rather than just “Dish,” and get an error response in return. I can only imagine what will happen when my wife or in-laws come over and want to watch TV and I'm not home.

The Harmony Express isn't the first universal remote to have built-in voice control. The Caavo Control Center also has this feature, which not only works quite well but is far more functional. Not only can you ask for specific apps, channels and streaming devices, but you can search across platforms for movies and TV shows by genre, actor and more.

What's more, you control your Caavo using either Alexa or Google Assistant. While the phrasing is clunkier ("Alexa, tell Caavo …"), I like that it's compatible with both assistants, rather than just one. The one limitation is that you can't use the Caavo remote to ask Alexa anything.

Also, I’m not sure if I want to be forced to use Alexa all the time. For example, if I'm watching TV in bed with my wife and she falls asleep, I don't want to risk waking her up by saying, "Go to ESPN," or "Watch Dish."  Oh wait, I meant “Turn on Dish.”

Long-pressing the mute button turns everything off, but I wish there were a dedicated button for this, as you'll find on pretty much every other remote in existence.

Another button on my other Harmony remote that gets a lot of use? The Back button. I use it all the time when I'm alternating between two different shows. The Express doesn't have this button by default, but using the Express app, you can re-configure the buttons on the remote; each can be set to perform a specific action using either a short or a long press.

Saying "Back" rewinds whatever you're watching by 10 seconds, while "previous channel" goes to the channel adjacent to the one you're watching. "Last channel" doesn't work.

The Logitech Harmony Express presupposes that you'll want to use Alexa to start every TV-watching session. While Amazon's assistant seems like it's ubiquitous, I don't know if I want to cede that much control to it. And the voice commands are just not intuitive enough yet.

If you want voice control in a universal remote, I recommend the Caavo Control Center. While you're limited to just four input devices with the Caavo, you're not locked in to using your voice. And not only is the Caavo's search functionality more robust, but it also works with both Alexa and Google Assistant.

The Harmony Express works just as it should. It just doesn't work for me.