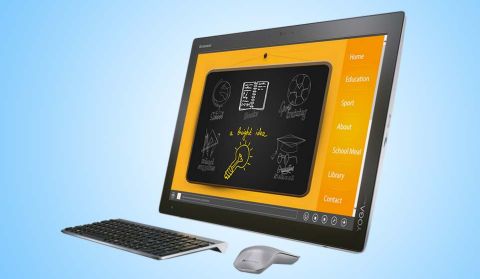 The Lenovo Yoga Home 900 packs a tabletop-ready design with lots of fun touch games, but its high price and weak speakers hold it back.

The Lenovo Yoga Home 900 is one-half PC, one-half giant tablet. This family-friendly all-in-one packs a 27-inch, 1080p display that can be laid flat on your coffee table, allowing you and your young ones to crowd around the screen and play virtual board games or doodle in digital coloring books. It's also not too shabby as an everyday computer, packing an Intel Core i5 processor and discrete Nvidia GTX 940A graphics that can handle multitasking and light gaming.

Starting at a pricey $1,399, the Yoga Home's impressive versatility makes it a good fit for families, but those seeking a more traditional all-in-one have better options for the money.

The Yoga Home 900 is essentially an oversize tablet ─ and a stylish one, at that. Its superslim 0.77-inch edges give the all-in-one an air of elegance, as does the PC's shiny aluminum frame.

You can lay the 900 flat for tabletop computing and gaming, or pop out its kickstand and prop it up 75 degrees to use it as a traditional PC. The 26.35 x 16.06 x 0.77 computer requires a decent amount of desk space, but, at 16.7 pounds, it's fairly easy to carry around. There's even an included tote bag should you need to take it on the go. By comparison, Apple's 27-inch iMac is less wide but taller and heavier.

The Yoga 900 offers plenty of room for peripherals, with three USB 3.0 ports, a headphone jack and an HDMI-in port that lets you use the PC as a monitor. On the right edge, you'll find a power button and a volume rocker.

The PC's 1080p webcam proved to be perfectly serviceable, capturing my skin tone and purple polo shirt with decent accuracy. Finer facial details can get a bit blurry, but that wouldn't stop me from using this camera to take selfies or Skype with friends.

The Yoga Home's 27-inch, 1920 x 1080 display is vibrant enough to entertain the family, whether you use it for watching movies or playing the PC's multitude of colorful tabletop games. Lenovo's desktop preserved the gritty details of the Rogue One: A Star Wars Story trailer ─ Jyn Erso's battle-weathered face looked true to life, and I could easily spot the myriad tiny lights and patterns on the Death Star and the Star Destroyer.

The Yoga registered an average brightness of 231 on our light meter, which is a far cry from Apple's 21.5-inch iMac (424 nits), but not too far from our 260-nit all-in-one average.

Lenovo's family PC proved more impressive when it came to color, reproducing 122.7 percent of the sRGB color gamut with a Delta E color-accuracy rating of 1.92 (closer to 0 is better). That's more color and better accuracy than the iMac (108.6 percent and 2.9, respectively).

The all-in-one's built-in speakers offer decent volume, but are severely lacking in low-end. Tracks like Fall Out Boy's "Irresistible" and Kendrick Lamar's "King Kunta" came through clearly in the vocal department, but each song's typically thumping bass was all but nonexistent.

The Yoga Home 900's biggest selling point is its Aura interface, which turns the PC into a virtual play mat that lets you toy around with photos and videos as well as access a ton of tabletop-minded apps and games.

When in Aura mode, you can open photos and videos and slide them around the screen like they were physical photographs. You can create slideshows out of your photos, as well as superimpose your selfies onto a handful of silly backgrounds such as city buildings, book covers and cereal boxes.

The Yoga packs a total of 22 apps and games that are designed to gather the family around the table. There's some quality stuff here, including Chess, Risk, Scrabble and zany party games such as King of Opera ─ which has you and your friends play as opera singers trying to knock each other off stage.

Crayola's standout Color, Draw & Sing app turns the Yoga into a digital coloring book that plays music based on which colors you draw with. There is a bit of shovelware, however, such as the generic matching game League of Mermaids and the strangely titled "Snowflake," a messy collection of shoddy-looking word and math challenges.

If you want more tabletop-friendly apps, you can head to the Aura store. While this marketplace simply curates items from the Windows Store, it does a nice job highlighting games, apps and multi-user experiences that are ideal for a family setting.

Packing an Intel Core i5-5200U processor with 8GB RAM, the Yoga had no issues juggling a bunch of tasks at once. The PC never crashed or slowed significantly during my time with it, even as I surfed a dozen browser tabs, watched four Twitch streams and ran a full system scan all at once.

The Yoga notched 5,124 on the Geekbench 3 overall performance test, barely trailing the Core i5-powered iMac (5,464) while besting our 4,951 average.

Lenovo's PC matched 20,000 names to addresses in 5 minutes and 17 seconds on our spreadsheet test, topping our 8:08 all-in-one average while lagging behind the iMac (3:49).

Thanks to its discrete Nvidia GTX 940A GPU, the Yoga Home can handle more than tabletop kids' games. The all-in-one ran the Rainbow Six: Siege benchmark at a smooth 57.2 frames per second at 1366 x 768 with graphics set to low, and maintained a playable 32 fps at 1080p. When I cranked the game to high settings at 1080p, however, it sunk to an unplayable 15 fps.

The Yoga 900 ships with a wireless mouse and keyboard, both of which look like budget versions of the silver accessories you normally get with an iMac.

That doesn't mean they work poorly, though. The keyboard's U-shaped chiclet keys made it easy to breeze through the Key Hero typing test at 92.7 words per minute with 96 percent accuracy (that's about my norm). The keys did feel a bit shallow with just 1.42mm of travel, however. The keyboard is pretty basic in terms of features, though there are dedicated buttons for adjusting volume and launching the Lenovo Vantage Technology app.

The included touch mouse has a seamless silver look, and I had no issues using it to navigate. You can scroll up and down web pages by simply sliding your finger along the mouse's middle button, and can open the Windows Start menu by clicking the bottom half of the button.

The Yoga Home 900 is one of the few all-in-ones to feature an onboard battery, allowing you to plop it on your coffee table without worrying about wires. Just don't expect to do that for the whole day; the PC lasted just 2 hours and 21 minutes on our battery test (continuous web-surfing over Wi-Fi). That's less than the 3 hours Lenovo says to expect, and lower than our 3:32 all-in-one average. Still, it's nice to be able to use the PC untethered for a few hours.

There aren't many products like the Lenovo Yoga Home 900, which impresses as both a giant tablet for your kids and a dependable desktop for getting work done. Lenovo's tabletop PC packs a nice selection of touch-friendly board games and education apps, and its 27-inch, 1080p display is colorful enough for movies and TV shows.

However, Lenovo's family PC costs a hefty $1,399, and you can get better all-in-ones for the price so long as you don't have little ones to entertain. Asus' stunning Zen AiO PC starts at $999 with discrete graphics, and a $1,499 model packs a 4K display and RealSense camera. There's also Apple's iMac, which starts at $1,099 with a gorgeous and bright 1080p display. Still, the Yoga Home fills a unique niche, and those seeking a desktop that the whole family can enjoy will find a lot to like about it.