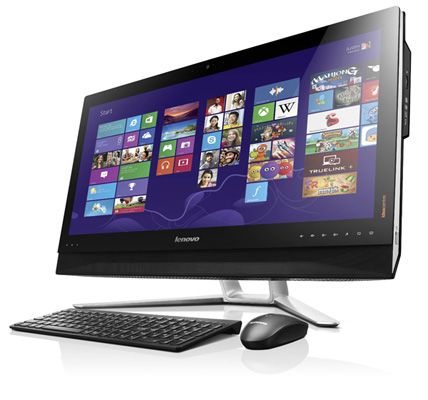 The Lenovo B750 packs both beauty and brawn, thanks to its massive 29-inch widescreen display, speedy Core i7 performance and dedicated Nvidia GeForce graphics.

It’s hard to distinguish between many all-in-ones currently on the market. Given that each features an Intel Core i5 or Core i7 processor, 6GB to 8GB of memory and a 1TB or 2TB hard drive, the differentiating factors often seem to boil down to aesthetics and price. The Lenovo B750, however, immediately stands out from the crowd, thanks to its massive 29-inch widescreen display – perfect for multitasking or watching movies with the family. The $1,549 B750 isn't all appearances, though, as it sports a Core i7 CPU, 8GB of RAM and Nvidia GeForce graphics. Read on to find out why we think the Lenovo B750 deserves a place on your table.

With its 29-inch widescreen display, the Lenovo B750 looks decidedly oblong compared to traditional all-in-ones. Its gorgeous edge-to-edge bezel frames the screen, while a 1.75-inch speaker grille runs along the bottom of the display. An integrated 720p webcam is situated above the screen, while a silver Lenovo logo sits at the bottom of the bezel. A bevy of stickers for Intel, Dolby and other component manufacturers at the top left corner of the bezel mar the B750's otherwise pristine exterior.

The left and right rear panels curve gently at the edges and feature a faux textured finish, giving them a three-dimensional appearance. A large vent grille spans the length of the top, with another smaller vent located in the middle between the rear panels. The left and right panels can be removed by sliding them to the sides, allowing you to easily access and replace the components.

A forked aluminum stand connects to the back of the B750 on either side of the rear-facing vent, allowing you to tilt the all-in-one about 30 degrees forward and backward. According to Lenovo, the B750 can also be wall-mounted to save space.

The B750's 29-inch, 2560 x 1080 IPS display is undoubtedly its standout feature. The widescreen dimension of the screen gives the impression of using two 15-inch displays side by side, but without the ugly bezel separating the dual screens. Colors look vivid, and viewing angles (both horizontally and vertically) are generous. When we watched a 1080p trailer for "How to Train Your Dragon 2," the multihued winged reptiles popped off the screen. However, we noticed quite a bit of glare when watching videos in rooms with lots of natural light, which made darkly lit scenes difficult to view.

When we measured the screen with our colorimeter, the B750 displayed 105.9 percent of the sRGB color gamut. This outclasses competing all-in-ones like the Toshiba PX35t, which only outputs 103.2 percent of the sRGB gamut. Color accuracy could be better, though, as the B750 managed a Delta E rating of 8.6 (1 is perfect accuracy). The Toshiba, by contrast, boasts a Delta E of just 3.3.

Unfortunately, the B750 lacks a touch screen, which is a shame given the size of the display. Windows 8's tile interface is much more intuitive when used with fingers, and we frequently found ourselves reaching for the screen. Furthermore, given its price we would have expected the B750 to include this capability.

Audio from the B750's JBL-powered speakers was loud and robust, though we noticed a hint of distortion when we turned up the volume higher than 50 percent. When we queued up the main theme from "The Pacific," the sweeping violins filled our small office, and the music enjoyed a good balance between bass and treble.

When we performed our audio test (measuring the volume of a single tone from 23 inches away), the B750 registered a whopping 92 decibels. This is louder than the 2013 Apple iMac (78 decibels), Lenovo ThinkCentre E93z (70 decibels) and the category average (84 decibels). The Toshiba PX35t registered slightly louder at 96 decibels.

The Dolby Home Theater v4 audio suite lets users select from presets for Music, Movie and Game, or create their own custom presets. Adjustable settings include a graphic equalizer, volume leveler and surround virtualizer. The suite also boasts an intelligent equalizer, which automatically adjusts high, mid and low frequencies to achieve certain sound profiles such as Focused, Bright and Rich.

Unfortunately, the black plastic AccuType wireless keyboard that ships with the B750 provided a mediocre typing experience. Although the keys offer plenty of vertical travel, the keyboard suffers from awkward key placement. The Fn and right Shift keys are undersized, and the Home key feels jammed next to the Backspace button. As a result, we frequently made typing errors, particularly when trying to perform keyboard shortcuts such as copy, save and paste.

On the other hand, the optical wireless mouse performed reliably. The left and right buttons aren't too stiff, and the scroll wheel rotated smoothly. The sides of the mouse are grooved, providing a comfortable grip for your thumb and pinky.

The B750 features an average selection of ports for an all-in-one. On the left side, there's two USB 3.0 ports, a 6-in-1 card reader, and two 3.5mm jacks for a headphone and microphone. On the back, you'll find two additional USB 3.0 ports, two USB 2.0 ports, HDMI-in, HDMI-out and an Ethernet port. A Blu-ray drive is located on the right side of the all-in-one.

The integrated 720p webcam will suffice for video chats, though the quality is hardly noteworthy. Pictures and video are grainy, and colors look saturated. On the plus side, video playback is smooth and doesn't suffer from motion blurring.

The B750 ships with a 3.4-GHz Intel Core i7-4770 processor, 8GB of RAM, an Nvidia GeForce GTX 760A GPU with 1GB of video memory, and a 2TB, 7,200-rpm hard drive – plenty of power to handle taxing tasks such as video editing and the latest games (albeit on mid-to-low settings). In our experience, we didn't experience a hint of stuttering when browsing the Web with multiple tabs open, streaming music and running a full system scan in McAfee Internet Security.

Thanks to its previous-generation 1GB Nvidia GeForce GTX 760A graphics, the B750 can handle many of the latest games – as long as you keep the graphics on medium or low.

The B750 handled the graphically intensive game "Bioshock Infinite" fairly well. When we ran the game on Low settings with the resolution at 1920 x 1080, it averaged 62 frames per second. Cranking up the settings to High, however, caused the frame rate to plummet to 20 fps.

The B750 ships with a lot of preloaded applications, some of which are useful and some of which are bloatware. Lenovo-branded software includes Lenovo Assistant, which lets you detect network issues, clear your browser history and other tasks, and Lenovo Dashboard, which allows you to control volume, brightness, Wi-Fi and Bluetooth. Lenovo also includes a number of family-friendly games such as Finding the Letters, Puzzle and Sudoku.

A unique addition to the B750 is Lenovo Eagle Vision, which automatically divides the screen into one, two or three zones for easier multitasking. We found it very useful for multitasking. When writing this review, for example, we could place Microsoft Word in the large zone on the left, Google Chrome in the top right zone, and a PDF in the bottom right.

One of the more intriguing applications is Lenovo Motion Control, which uses the webcam to detect hand gestures. Using this software, you can flip through photos, PowerPoint slides and e-book pages or skip, control the volume or mute music. For instance, you can wave your hand in front of the webcam to scroll through photos or fast forward a video, or hold your finger to your lips to mute the audio. For the most part, Motion Control worked reliably, although occasionally it failed to recognize a gesture.

The B750 includes a one-year parts and labor warranty.

Currently, only our review configuration is available on Lenovo's website. This $1,549 configuration includes a 3.4-GHz Intel Core i7-4770 processor, 8GB of RAM, an Nvidia GeForce GTX 760A with 1GB of video memory, and a 2TB, 7,200-rpm hard drive. Also included is a Blu-ray drive.

Amazon.com and Newegg.com sell a less expensive configuration that includes a 3.1-GHz Intel Core i5-4440 processor, 6GB of RAM, a 1TB 7,200-rpm hard drive and an Nvidia GeForce GTX 760A GPU. At the time of this writing, this configuration is on sale for $1,049 on Amazon.com.

The $1,549 Lenovo B750 is a great all-in-one for the family or home office. Its 29-inch widescreen display is perfectly suited for multitasking, and its loud and rich audio, bright screen and wide viewing angles make watching movies an experience you can enjoy with the whole family. And if you're interested in playing graphically intensive games, the B750 can handle that as well – as long as you're willing to play with the graphics dialed down. However, the lack of a touch screen is a disappointment, given the size of the display and cost of the system.

The Lenovo ThinkCentre E93z offers comparable components (Core i7 CPU, 4GB of RAM and Nvidia GeForce GT 720A graphics), plus a touch screen, for about $200 less. Of course, you'll be trading in the B750's 29-inch display for a 21.5-inch screen, which may be a deal breaker for some. The Toshiba PX35t ($929) and the 2013 Apple iMac ($1,299) are even cheaper alternatives, as long as you're willing to downgrade to a slower Core i3 or Core i5 processor. For those who don't require a touch screen, the Lenovo B570 delivers a wide display, plus the performance to take advantage of all that real estate.