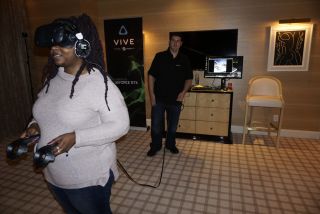 Your desktop or laptop might be Oculus-ready, but what about the Vive? Valve has rolled out a way to determine if your system is HTC Vive-compatible ahead of the $799 VR headset's Feb. 29 preorder date.

The free SteamVR Performance Test is a two-minute procedure that will test your system's rendering power using Valve's Aperture Robot Repair VR demo. Yes, that's right, the demo will be utilizing a few of the robots from Valve's cult classic Portal to let you know if your PC cuts the mustard. It's not as good as another entry in the series, but I guess it'll have to do.

MORE: What's Next for VR

SteamVR is infinitely more helpful than Oculus' test, which delivers a simple yes or no answer. In addition to checking the rendering capabilities, the test also checks if your PC can maintain the 90 frames per second necessary to sustain a VR experience. If the test determines your system isn't VR ready, it will point out which components are keeping it and you from playing in a virtual playground. This way, once a consumer finds out which part is missing the mark, they can just replace that component instead of forking out money for another system.

The test isn't Vive-exclusive, informing users if their system can handle the rigors of "high-fidelity VR". It also advises that different headsets might require varying levels of processing power for CPU-taxing apps and positional tracking. As granular as the test is, it's odd that it doesn't check if your system has the correct number of USB ports for each device. Still, it's a great way to break down the nitty-gritty of your PC as it pertains to virtual reality.