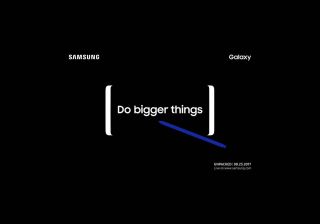 The Galaxy Note 8 is just about ready for its close-up.

Samsung has announced that it's holding a press event in New York on August 23. While the company didn't call out the Note 8 by name, it did say the event would focus on the global unveiling of "Samsung's newest mobile device."

With the S8 featuring a screen size nearly as big as the Note 8, expect this new phone to differentiate itself with more power inside — the Note 8 is expected to feature more RAM and possibly a Snapdragon 836 processor — as well as dual-rear cameras on the back. The Galaxy S8 has a single camera.

Leaked renders, purportedly of the new Samsung phone, have all but confirmed that the Note 8 will be the first Samsung phone with dual cameras, matching a feature found on Apple's iPhone 7 Plus.

The Note 8 figures to receive a lot of scrutiny beyond what a Samsung flagship device normally commands, given what happened to the Note 7. That phablet launched to much fanfare a year ago, only to face a disastrous product recall after its battery overheated in multiple instances.

Whatever Samsung has planned for its next phone, we'll be on the scene to cover the launch event on August 23.