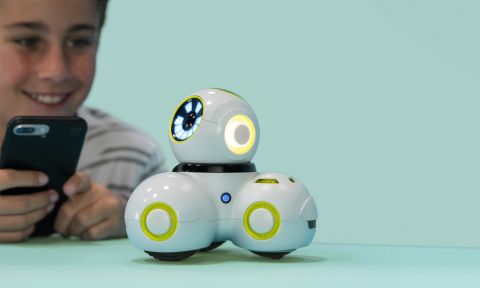 Cue's CleverBot offers a very realistic and entertaining programming experience that teaches kids how to code.

Wonder Workshop, maker of the Dash & Dot robots for younger kids, has just introduced the Cue CleverBot, an interactive robot that can chat, teach coding, and move around on its own or under your control. The robot is available in white or black and costs $199.99. After playing with it for a few days, I can't get enough. A lot of toys claim to teach coding, but this is the first one I've seen that has something for all levels, from beginner to advanced. Aimed at kids age 11 and up, this is a toy that can grow with a child (or an adult).

Cue comes with everything you need except a device to run the app. You can see a list of compatible devices on the company's website. Note that Fire tablet compatibility is coming soon.

I was stumped right at the beginning when I couldn't figure out how to get Cue out of the box. The front of the box folds down, but Cue was stuck in the container in such a way that I couldn't see a solution. I ended up tearing the box open and discovered that the robot was held in place by two connectors on the right and left sides. I pulled those away, and the Cue came free.

When you turn Cue on, it goes into a welcome mode that has you do a couple of simple tasks, like give it a fist bump (to test its proximity sensors) and call it to you (to test its microphones). Then, it prompts you to download the Cue app so that you can get started.

My Cue had enough power to get through the testing and pairing process, but soon after that, it complained about a low battery. So, giving the Cue a charge in the beginning isn't a bad idea, especially since it will probably need to download a software update, a process that can take up to 15 minutes.

The Cue app is available for Android and Apple (an app for Fire tablets will be available in November) and communicates with the device via Bluetooth. I used Cue with an Android phone and had an issue signing up for a Wonder Workshop account on the app, which is necessary for setup. No matter what I did, the app would not let me get past the sign-up screen. So I switched to a browser, signed up for an account on the Wonder Workshop website, and then went back to the app and signed in, no problem.

After that, I got stuck in a continuous loop of the app finding my Cue robot, telling me that it needed to update the robot, updating, and then searching for the robot and starting over with the need for an update. After restarting both the robot and my phone multiple times, I was finally able to get Cue to update successfully and pair with the app. After that, I had no problems.

There are four avatars to choose from. The avatar you pick determines your robot's personality. You can pick only one, unless you want to pay $4.99 to get another avatar. You can do a demo chat with each of the avatars before choosing one, to get an idea of each personality and voice. During the chat, the avatars will text with you and talk.

Even before you give Cue an avatar, it has a personality, one with a dry wit and bored voice. I wish I'd been able to keep that default personality as an avatar. When it was waiting for me to download the app, it got impatient, saying things like, "You know the avatars won't just download themselves," and singing "I'm a robot hero, with stars in my eyes," to the tune of "Jukebox Hero"by Foreigner. That was a personality I could hang out with.

The four available avatars — Charge, Pep, Smirk and Zest — are all different, so test them out until you're sure you know which one you want. Once you claim an avatar, you're good to go!

Text-based chatting is one of the Cue's main functions (it doesn't do voice recognition). According to Wonder Workshop, Cue has a vocabulary of more than 170,000 words and 30,000 chat responses. If you click on the question mark at the top of the app screen, you'll see some conversation starters. If you're not sure what to say, you might try clicking on one of those to get Cue talking. You can communicate in emojis, too.

Cue can tell you jokes, talk about books and celebrities (Pep dissed John Stamos in my test chat), and make snarky comments. If you type in a curse word, Cue will tell you the term is not part of the robot's programming, or something similar, and change the subject. The chats are saved, and you can't erase entries.

I was underwhelmed by the chat function, but I'm probably not the target audience for that. I could see a tween getting into it.

Control mode lets you pilot Cue with an on-screen joystick. You can adjust the robot's speed and can record up to 10 sound clips that it will play back on demand.

You can also put Cue into one of three automatic modes:

This is kind of a beginner version of the Code activity (see below); you use a graphical programming language to instruct Cue. There aren't as many options as with Code mode, but it's also less intimidating. You can make groups of instructions involving movement, lights and sounds, editing the specifics, and then connect groups together to form a string of instructions. You can even make conditions for when a new section of code is executed. It's definitely not as complicated as the coding mode, but it still offers tons of options and a lot of flexibility.

You can name your programs, give them different symbols for the menu and make copies. You do not need to be connected to Cue to write programs. Once you try to run a program, you'll be prompted to connect to Cue.

MORE: Augmented Reality Glasses: What You Can Buy Now

This mode is where you really get your money's worth with Cue. Many robot toys say that they'll teach your kids to code, but Cue takes it to the next level. Rather than the proprietary programming languages we see on most robotics kits, Cue uses Microsoft's MakeCode language, which lets you switch between block-based coding and text-based JavaScript. So, the skills your child learns with Cue will be transferrable both to real-world adult projects and to other kids' products, such as Minecraft, that use MakeCode.

The app begins by asking you to do simple tasks, like turn Cue's lights off. There isn't a lot of guidance, although you will get a hint if you try to execute incorrect code. Through exploration and trial and error, you can figure out what the different commands mean and how to change the variables. Each lesson builds on the last one, and once you've completed four tasks, you will unlock a "demo," which is much more complicated code that you can have Cue run.

You can use a combination of Actions, Events, Control Structures, Variables, Math Operations and Functions to program Cue. With so many different lights, sounds, buttons sensors and movements, the possibilities are endless.

For both Create and Code modes, you can program Cue's movements down to the centimeter and its swivels and head tilts in 360 degrees. This allows you to program precise tasks.

You can save your codes and make copies in case you want to work off of something you did before without changing the original. You do not have to be connected to Cue while working on codes, only when you want to run a code.

The downside? It's difficult to see an entire block of code on a phone screen, so I had to move the screen around a lot to see all of the parts of a block. I accidentally moved code out of place or dumped it in the trash bin more times than I can count. Thank goodness for the Undo button. Being able to look at code blocks in landscape mode would be great.

When not connected to the app, you can still play a game with Cue by pressing any of the outer buttons on the robot's head. The game is like Simon, with the lights on Cue's head lighting up in a pattern that you have to copy.

Cue has its own speaker and makes its own sounds, but the app also makes noises, playing music in some modes and sound effects in others. You can turn the volume down on your phone or on Cue's separate volume control, which is accessed in the app under Robot Settings.

You can see how much battery Cue has in the app by clicking on Cue's face in the top right corner of the app and then on the gear icon. Cue charges via a micro USB cord (only the cord is included, no plug); when the power switch stops glowing, Cue is charged. A charging station is coming in 2018.

Cue also comes with a couple of "connector blocks" that snap onto the sides of the robot. They have what look like Lego bricks on the top and holes for other building systems. I couldn't find any instructions for these, but I could totally see building some sort of structure on top of Cue and programming it to carry things. Cue also comes with some stickers that you could decorate the robot with.

This toy is definitely worth the money. Since Cue CleverBot's programming capabilities are advanced, it will not get old quickly. This is an actual learning toy, one that teaches a real skill, but it does it in a fun way.

While the target age is 11+, I could see older kids and teens getting into the programming aspects. For a child who doesn't get interested in the coding, the robot is still fun to play with, but the real value is in the coding. If you're just looking for a toy that will vroom around, you don't need to spend $200, but if you want to learn, this is worth it.