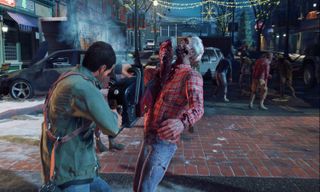 E3 2016 was all about the games. From revivals of classic series to creators of brand-new properties, this year's show offered something for everyone. PCs, consoles and virtual-reality systems all got new and exciting games, with some titles trying for something radical and others refining well-worn ideas. But the end result was always something ridiculously rewarding to play.

This year's show saw the return of a missing God of War, a stand-alone VR headset, a South Park game that's just as vulgar and hilarious as the show, a way to serve on the bridge of a Federation starship, and much more. Read on to find out what the next year or two of gaming will bring.

Best of Show: The Legend of Zelda: Breath of the Wild

If you mashed up Mega Man with a modern third-person action game, you'd get something a lot like ReCore. This shooter/platformer hybrid is delightfully challenging, and once you get into a rhythm of shooting, dodging enemy attacks and calling in your robot pals for help, it's hard to turn away. ReCore takes place in a beautiful yet barren post-apocalyptic world, where you can summon a variety of fun robo-companions that help you with exploration, traversal and combat. In an age of overly grim action games, ReCore's refreshing arcade-style action stands out.

After waiting six long years, fans of the God of War series broke into riotous applause as Kratos, the Ghost of Sparta stepped into the frame. This time around, the perpetually angry anti-hero has lost some of the angst so that he can care for a young boy left in his charge. The game has also matured, getting rid of cumbersome combo counters and distracting minigames in favor of a more immersive experience.

MORE: God of War Returns with a Mix of Family and Violence

When you were in high school, did you glance up from your world history textbook, roll your eyes and say, "I could have done better than that"? Civilization VI gives you a chance to prove it. The latest title in Sid Meier's quarter-century-old strategy game series, Civilization VI, lets you guide a society from the Stone Age all the way up through the Space Age and tailor every step along the way to suit your vision. The game offers plenty of improvements over previous installments, including better graphics, more nuanced city construction and an emphasis on cultural achievements.

You are vengeance. You are the night. You are Batman in Warner Bros. Entertainment's first entry into the virtual-reality arena. Once you don the cape and cowl, you'll have all of the Dark Knight's gadgets at your disposal — including the grappling hook and batarangs — in an immersive 360-degree environment. But will that be enough for the Caped Crusader to solve one of his most emotionally devastating cases? It's up to you to examine the crime scene and piece together the events of what will test the hero's reputation as the "world's greatest detective."

MORE: Batman: Arkham VR Is the Game We Didn't Know We Needed

Virtual-reality headsets have been divided firmly into PC or mobile camps — until now. The Pico Neo ditches that convention, asking, why not both? Storing the bulk of its major components in an accompanying controller, Pico Neo delivers a VR experience that can rival that of the Samsung Gear VR and make the transition to PC by simply being plugged into a USB port.

With Project Scorpio, Microsoft is throwing down a heck of a gauntlet in this generation's console wars. Due out late next year, Scorpio is a beastly new Xbox machine that will power 4K and virtual-reality experiences in your living room, while still playing all of the Xbox One games you already own. While Scorpio's eight-core CPU and six teraflops of power are impressive on their own, what's more significant is that it's changing the conversation around consoles. Microsoft has officially declared that high-end gaming isn't just for PCs. Your move, Sony.

MORE: Get Ready for Project Scorpio

LawBreakers takes typical multiplayer-shooter conventions and smashes the floor out from under them — literally. This frenetic team first-person shooter has no time for the concept of gravity, with maps that let you freely float through the skies while pulverizing your enemies with one of several unique heroes. Whether you're jetpacking around as the Vanguard or swinging and sneaking as a blade-wielding Assassin, Lawbreakers' explosively fun characters are pretty much guaranteed to create highlight-reel-worthy moments every time they clash.

If you've ever watched an episode of Star Trek and dreamed of manning a station on the bridge of a Federation starship, Star Trek: Bridge Crew can turn your fantasy into a (virtual) reality. This VR game works best with four players who take the roles of Starfleet officers: captain, engineering, helm and tactics. By working with your friends, you can reroute power, warp into distant star systems and take on hostile ships as you explore the iconic Star Trek setting. Working together to run a ship is absolutely imperative in Bridge Crew, making it a cooperative multiplayer experience unlike any other.

Frank West is back, and he's ready to share the Christmas spirit with hundreds upon hundreds of murderous zombies. Dead Rising has always given players a variety of weapons and a big, open world to explore, but the latest version chucks out the franchise's last pretenses of seriousness in favor of a gonzo zombie-killing rampage. Don a set of power armor and wreck zombies with a parking meter. Impale them with a crossbow that shoots candy canes. If you're running short on Christmas tree lights, set a pyramid of zombies on fire instead. With tight, creative gameplay and a real sense of humor, Dead Rising 4 could prove downright lively.

MORE: Dead Rising 4: Back and Better Than Ever

How do you improve an excellent DC Comics fighting game? Add new heroes, vastly better graphics and an innovative gear system that allows you to build your own custom version of iconic characters such as Superman, Batman and Aquaman. Fresh faces, such as the big-bruising Atrocitus and the extra-nimble Supergirl, add a whole new dynamic to Injustice 2's airtight combat, while the game's super moves and stage transitions are more joyously over-the-top than ever before. I mean, who doesn’t want to see Supergirl punch someone into space just to eye-beam them back to Earth?

Despite a few false starts, the Roccat Sova is almost ready to begin shipping, and it's not a moment too soon. This lapboard could be just the thing for PC gamers with a living room setup, as it comes with a built-in, full-size keyboard (membrane or mechanical; take your pick), a large mouse pad and a substantial wrist rest. The whole apparatus fits comfortably in a player's lap, making it just as easy to play any game from a couch as it is from a desktop. Gamers will also eventually be able to 3D print their own wrist rests and mouse pads to swap out, making the Sova a device to suit almost any play style.

Think video games are getting too politically correct? Well, Ubisoft San Francisco has just the game for you. Following up on South Park: Stick of Truth's success, the boys are back and just as crude as ever in Fractured But Whole. This time around, the Cartman, Stan, Kenny and Kyle are reprising their superhero personas to hilarious effect as the New Kid from the last title attempts to get in on the fun. Get ready for deeper battle systems, new fighter classes and tons of fan service.

After Order of Ecclesia in 2008, Castlevania fans assumed that they'd seen the last of their beloved series. They assumed wrong. Bloodstained: Ritual of the Night is the result of Castlevania creator Koji Igarashi's wildly successful Kickstarter, and it's clear that he's still got his magic touch. Bloodstained: Ritual of the Night is about as close as you can get to a classic, side-scrolling Castlevania game, featuring ghoulish foes, a wide variety of weapons to equip, gorgeous 2.5D graphics and a large, nonlinear map to explore. The formula is just as addictive now as it was in 1997, and, like a fine wine, the gameplay has only improved over time.

MORE: Bloodstained Is the Castlevania Successor We Deserve