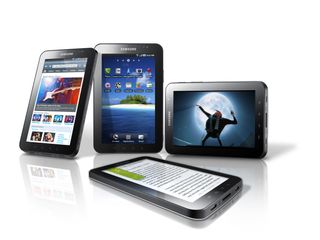 Announced at Mobile World Congress and then re-imagined and re-announced at CTIA Wireless a few weeks later, we first caught sight of Samsung's super-slim follow on to the 7-inch Galaxy Tab in March of this year. The WiFi-only version of the Galaxy Tab 10.1 launched in early June, however, it seems Samsung and Verizon are ready to bring another flavor of Tab of the table.

Verizon today announced that it would be bringing a LTE-equipped (commonly referred to as 4G) version of the Honeycomb-equipped Galaxy Tab 10.1. Those committed to purchasing the LTE device can expect download speeds of 5 to 12 Mbps and upload speeds of 2 to 5 Mbps in 4G coverage areas. Pricewise, you're looking at $529.99 for the 16GB model and $629.99 for the 32GB model (both on 2-year contracts) with a choice of the following plans: