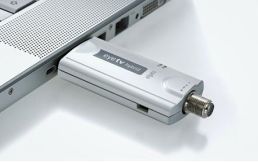 Up Next, the PC TV

Whether you just have to watch “American Idol,” “Clean House” or “The Bachelorette," on your computer, all diehard Internet video fans eventually require access to old-fashioned television every now and then. One of the best ways to tune in is not to turn on a traditional TV set in the den or kitchen but to watch it on a computer.

On top of being a stereo, online video viewer and Internet communications portal, the PC takes its place as a television set that’s every bit as good as a stand-alone device. In other words, it is finally simple to turn your computer into an entertainment center.

To turn your PC into a TV, all you need is a plug-in tuner to grab the signal and display it on the computer’s screen and record your favorite shows on the system’s hard drive. But, incorporating a tuner is more complicated than hitting a remote control button because there are multiple transmission standards that need to be dealt with.

·        Since last June, all TV broadcasts in the U.S. have been digital using the ATSC standard.

·        Some cable networks still use old school analog signals based on the antiquated NTSC standard.

Thus, the need for a tuner that can grab and display a variety of TV signals.

I went in search of a TV tuner to use on my notebook so I could watch TV just about anywhere. It doesn’t matter if I watch TV while I work or work while I watch TV. The result is the same.

I gathered up three devices from the most recent crop of TV tuners that plug into a USB slot and connect to either an antenna or a cable TV line. Each was given a thorough going over using a Toshiba Satellite L555 notebook with a Core 2 Duo processor, a 17-inch screen and 3GB of RAM.

Each of the tuners was able to work with analog and digital signals, play my favorite TV shows without a problem and record those shows I didn’t have time to watch when they were broadcast. The best, however, add creature comforts, like the ability to tune in FM radio stations.

The best part is that even the most expensive tuner costs less and uses less power than a stand-alone TV, but the big pay-off is that you’ll be able to watch your favorite shows on a notebook, anywhere you happen to be. It also shatters the age-old myth by letting you take it all with you.

Current page: 3 Tuners For HDTV on Your Computer