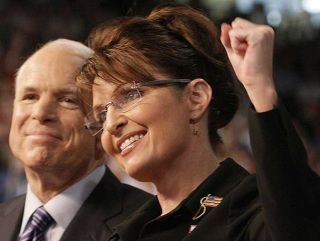 The Fox 5 team saw an advert in the Washington Post advertising a sort-of McCain-Palin campaign yard sale; office furniture for low prices. Thinking it was worth checking out, a couple of Fox 5 reporters headed down and were a little disappointed that all the good stuff was already gone.

Not ones to give up right off the bat they looked around a little to see if they could find something that tickled their fancy. They saw some cheap laptops which they were unable to log into, but were assured they’d be wiped before they were sold. Moving on, they wandered over to a table where they were selling off the campaign BlackBerrys for twenty bucks each. This being a pretty sweet deal, they bought a few.

Once the Fox 5 reporters got back to the office and charged the phones they saw that one of the devices had a whole bunch of McCain-Palin information on it. Phone numbers, emails dating as far back as September, you name it.

They called a few of the contacts and were told that the information should have been deleted before the phones were sold with one contact telling the reporter that he was not at all surprised that they had neglected to wipe the phone “given the way the campaign was run.”

We’re wondering who’s job it was to clean off the phones. Seems like something you’d want to double check. Check out the full story with more details on Fox 5.