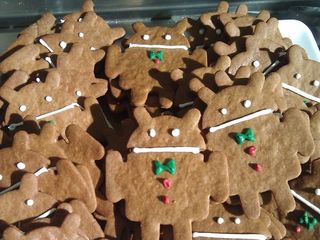 The upcoming "Gingerbread" build of Google's Android OS has been a hot topic for quite some time, reportedly offering a visual make-over in the UI department, better support for 3D games, improved copy-and-paste functionality, Wii-like motion controls, Google Voice of Wi-Fi, video chat and more. Knowing high user anticipation for the next version, Google Mobile is currently teasing the Android community on Twitter.

As seen in the picture, Google is getting ready to serve up something sweet: Android-shaped cookies made out of Gingerbread. The photo was included in a tweet dated a few days ago--November 12--saying that the company cafes are "baking something sweet."

Could this be it? Is Google really gearing up to (finally) launch Android 2.3? Industry watchers believed that Google would officially unveil Gingerbread during this week's Web 2.0 Summit. There was also indication last week that Gingerbread would rear its head this week thanks a Twitter update by Alvaro Fuentes Vasquez of the Open Handset Alliance (OHA) saying that the OTA update would arrive on the developer's version of Nexus One.

However Google CEO Eric Schmidt took the stage on Monday and showcased what's believed to be the Nexus S. Although he didn't officially reveal Gingerbread with balloons, a parade and a truck-load of cookies, he indicated that the OS would have a focus on short-distance secure data transfers thanks to Near-Field Communication (NFS) technology. This means the Gingerbread-welding consumer can wave the smartphone against a terminal to purchase anything, seemingly nuking credit and debit cards.

"I don’t think people understood how much more powerful mobiles are going to be than the desktops," Schmidt said during the summit. As it stands now, Gingerbread isn't arriving this week despite our hopes. According to Schmidt, the OS update will officially arrive within "the next few weeks."