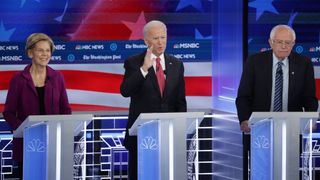 We're hitting pause on impeachment news as tonight's Democratic debate gets underway. And, thankfully, the stage is shrinking down to give the remaining candidates more time to argue the issues.

Here's everything you need to know to live stream tonight's Democratic debate, including where you can live stream it online for free, even if you've cut the cord.

Since the remaining candidates are all on the same side when it comes to the impeachment of President Donald J. Trump, they're likely going to spend this debate focusing on trying to gain some momentum or land a critical verbal hit on those with rising stock.

With former vice president Joe Biden still at the head of polling, we're curious about whether or not he'll jump in the fray, or try and stay above it all with the intent to select one of these candidates as his running mate.

When is tonight's Democratic debate?

The December debate is underway, having started at 8 p.m. Eastern | 5 p.m. Pacific. Yes, those in the U.K. are staying up until 1 a.m. GMT, which even I couldn't do for this debate.

Senator Elizabeth Warren (D-Massachusetts) has the most to gain at the moment, as her position in the pack has tapered off after questions of how she will use taxes to pay for her plans. Warren and Senator Bernie Sanders (D-Vermont) have avoided attacking each other, and we'll all have our eyes on them to see if this quiet coalition continues.

Mayor Pete Buttigieg of South Bend, Indiana, somehow made it out of the last debate rather clean, even after his polling numbers rose to make him a target of the other contenders. The left wing of the party sees Mayor Pete as too centrist, and recent headlines about his fundraising events and past jobs as a consultant will likely give other competitors openings to attack — but will he already have a rejoinder ready?

Meanwhile, there's also Senator Amy Klobuchar (D-Minnesota), financier Tom Steyer and tech entrepreneur Andrew Yang, who round out the rest of the pack and need to find a way to make themselves a more compelling choice.

The pack has thinned even more. Yes, as you look at the debate roster (in alphabetical order), you'll see three missing faces from the last debate: Cory Booker, Tulsi Gabbard and Kamala Harris. Booker and Gabbard didn't get enough traction in qualifying polls, while Harris dropped out.

Julián Castro, who was not at the Nov. debate, is airing an ad during this one. Booker also has an ad coming.

How can I watch the Democratic debates online?

Where can I live stream tonight's Democratic debate?

Trying to stream the Democratic debate? It's going to be streamed on pbs.org/newshour, pbs.org, politico.com and CNN.com.

AT&T Now: The service formerly known as DirecTV starts at $50 a month, and this Plus package includes CNN.View Deal

YouTube TV: You'll find CNN among the 70-plus channels YouTube TV includes for $50 a month. And YouTube TV is another streaming service that boasts a cloud DVR feature.View Deal

Looking for the most affordable way to watch the debate and other live TV channels? Sling TV (starting at $25) is the only service with a price under $50, and it's actually half that price. View Deal

How do I use a VPN to watch the December Democratic debate online?

If you're on vacation, and you want to use the streaming service you're paying for — which could it you with a location-based blackout issues while abroad — you might need a VPN. A virtual private network, or VPN, can help you connect to your desired streaming service through a U.S. server and watch the draft as if you were at home.