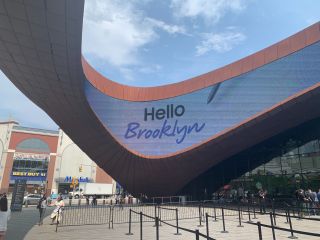 Galaxy Unpacked 2019 is in the books, giving us our first look at the long-awaited Galaxy Note 10 and Galaxy Note 10 Plus as well as Samsung's latest laptop, smartwatch and a surprising partnership with Microsoft.

The $949 Note 10 is one of the most compact big-screen phones we've gotten our hands on, with a gorgeous bezel-free Infinity-O screen that covers its 6.3-inch design as well as a slew of neat S Pen features. There's also the massive 6.8-inch Note 10 Plus, which delivers even more real estate (and a big battery) for a very pricey $1,099. Both phones have killer cameras, and some truly stunning AR capabilities.

We also got our first look at the Galaxy Book S, which is incredibly slim and promises nearly a full 24 hours of battery life. Samsung provided a deeper dive on the Galaxy Tab S6 and Watch Active 2, and demonstrated how Galaxy phones and Windows 10 PCs are playing nicer together than ever.

Check out our live blog below for a recap of all of the biggest announcements, as well as our hands-on impressions of the Note 10 and Note 10 Plus:

5:12 p.m. - And that's a wrap. Props to Samsung for keeping things to just over an hour (cough, Apple, cough). We're heading to the product showcase, so stay tuned for more hands-on impressions out of Brooklyn!

5:06 p.m. - Koh is talking about the ways Samsung is aiming to do good around the world, including initiatives to recycle Samsung products and bring resources to areas in need. The company is working with the United Nations to improve global sustainability by 2030. A new Galaxy Goals app will raise awareness for these initiatives and help Galaxy owners become more conscious of issues such as poverty and climate change.

5:05 p.m. - Or not. Nadella spent a few minutes recapping what the Samsung/Microsoft partnership means, and how Galaxy and Windows devices will become even more connected in the future.

4:56 p.m. - Anjum is comparing the Galaxy Book S to a smartphone rather than a typical PC. This slim 13.3-inch Windows 10 laptop has LTE capabilities, charges via Type-C, packs a Snapdragon CPU and has a battery meant to last a whopping 23 hours. We can't wait to see if that's actually true. The $999 laptop is coming in September.

The Galaxy Book S is here. It looks really, really, really light. 23 hours of battery life. But we’ll have to see if Qualcomm CPU is powerful enough. $999 in September #GalaxyBookS #SamsungEvent pic.twitter.com/yowA0J6bzzAugust 7, 2019

4:55 p.m. - The Galaxy Book S is official! Man, this thing is slim. And this music is getting me a bit emotional. Why are you making me cry, Samsung?

4:48 p.m. - Samsung and Microsoft are teaming up to make the Note 10 work even better with your Windows 10 PC. The Link to Windows button is now in the Note 10's main control panel, making it easy to connect right away and view your texts and notifications on Windows via an improved Your Phone app. And soon, you'll even be able to take calls right from the PC.

4:47 p.m. - Hassan Anjum is on the stage. Time to talk computing! Could we finally see the Galaxy Book S?

4:40 p.m. - Time to talk about the Galaxy Watch Active 2, which we got our hands on last week. The watch has a digital rotating bezel, and is built to better accommodate smaller wrists. It's also getting a fancy Under Armour edition, which links to Under Armour's smart shoes (yes, those are a thing) to better track those heated run sessions. The watch starts at $279 and launches Sept. 13.

4:39 p.m. - Vig just unveiled the Note 10 Plus 5G, and is talking about how 5G will allow us to take better concert videos than ever. Because what we really need is more people with their phones out at concerts.

4:37 p.m. - Samsung's Pooja Vig is on stage to talk performance, particularly around gaming. She mentions that the Note 10's vapor chamber will keep your device cool even during heated Fortnite sessions. The phone also has Discord integration, so you can easily voice chat with your Discord pals while you game on the go. She even threw in terms like LFG, GG and AFK to prove the Note 10 is totally serious about gaming!

4:33 p.m. - Now this is cool. The Note 10's camera packs a full 3D scanner, which allows you to scan a real-world object to get a 3D model that you can duplicate with a 3D printer or drop into pictures or videos. In a demo, we saw a 3D-scanned teddy bear turned into a virtual model that could mimic someone's dance moves. Weird and kinda awesome.

4:30 p.m. - We're checking out the AR doodle feature, which allows you to add 3D art to any person or object and have it track them in real time. In a demo, flowery letters surround the subject, Josh, even when he moves around.

4:26 p.m. - Samsung is really leaning heavily on influencers to promote the Note 10. We saw content creator Casey McPerry in a quick promo video, which he edited entirely on Samsung's new phone. Neat.

4:23 p.m. - Time to talk cameras. Blackard says that "we're taking the pro-grade photography tools of the Note and bringing it to video." That includes real-time bokeh effects for video, as well as an "audio zoom" feature that brings sounds into focus as you zoom in. Cool? Yes. Borderline creepy? Almost.

4:18 p.m. - Blackard is going in-depth on the S Pen, discussing the stylus' ability to understand multiple languages, work with advanced applications like Excel and provide more advanced remote controls for your Galaxy devices via a new onboard motion sensor. Travel blogger Eva zu Beck is demonstrating how the S Pen can come in handy when trying to shoot quality photos of yourself while traveling.

4:15 p.m. - Lots of oohs and aahs for the Note 10's new color options. People seem to be happy about the Aura Glow design.

4:12 p.m. - Samsung strategy senior director Drew Blackard is here to tell us about the Note 10. He says the Note 10 is "a smartphone that can do anything, designed for people who want to do everything." He's especially playing up the phone's drawing capabilities, and the more compact design of the base Note 10, which he calls the most narrow Samsung's ever delivered.

4:08 p.m. - Samsung's DJ Koh has taken the stage to discuss how 5G and mobile innovations will change the way we do business and live our everyday lives. He calls the Note 10 the "most powerful phone for power users," calling out lag-free gaming performance and movie-quality streaming.

We’re inside the #SamsungEvent. Get ready for #GalaxyNote10 news. pic.twitter.com/YriBSdjE04August 7, 2019

2:40 p.m. - The rain is coming down in New York, and folks are starting to get anxious. Let us in, Samsung!

2:00 p.m. - We've arrived at the Barclays Center in Brooklyn and folks have started to line up for Unpacked 2019. The displays around the arena seem to be teasing new S Pen features.

I’m thinking the S Pen will be a BIG theme at the Galaxy Note 10 launch. #SamsungEvent #GalaxyNote10Plus pic.twitter.com/7YsHrMbANfAugust 7, 2019

1:00 p.m. - The Note 10 will support super fast charging, but you'll need to pay extra for it. Roland Quandt has the first look at Samsung's 45W Super Fast Charger, which will be sold separately for about $56.

Here's that (pretty big) 45W Super Fast Charger with USB PD for the Samsung Galaxy Note 10+. You'll have to pay 49,99 Euro for this thing, as it does NOT come in the box. pic.twitter.com/PleLFltuDHAugust 7, 2019

12:18 p.m. - The Note 10 launch will likely have Samsung fans torn over which flagship to buy. Here's our early comparison of how the Note 10 and Galaxy S10 stack up.

11:06 a.m. - The pre-Unpacked leaks just keep coming. A set of leaked marketing materials discovered by Android Central confirm all of the specs we've been expecting, including a new feature called Audio Zoom and the phone's gorgeous new blue color scheme. Additionally, the first Note 10 accessories have started to surface via WinFuture, including cases and chargers.

9:46 a.m. - Right on cue someone has mistakenly revealed the release date of the iPhone 11. Was it an accident or just an attempt to steal the Galaxy Note 10's thunder?

9:30 a.m. - If you're looking to catch Samsung's big event live, we've compiled a handy guide on how to watch Galaxy Unpacked 2019.

8:00 a.m. -  Just hours before the Note 10's official launch, we've learned that the Note 10 will pack Samsung's brand-new Exynos 9825 processor. This 7nm chip is more energy efficient than the Exynos 9820 that powers the Galaxy S10, so you should expect a significant power boost in the international version of the Note 10. The U.S. version of Samsung's upcoming flagship is still expected to pack a Snapdragon 855 CPU.