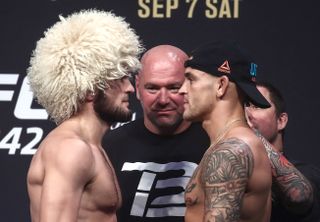 In the world of ultimate fighting, there are few people more interesting and fun to watch that Khabib Nurmagomedov. Coming off his impressive win over Conor McGregor — and his subsequent suspension following the after-fight antics — all eyes are on the mixed martial artist to see if he can take down the similarly impressive Dustin Poirier. And while most believe Khabib will take the day, there are still others who think the fight will be far more competitive — and dangerous for Khabib — than initially thought.

But the night isn’t only about Khabib and Poirier. They’ll be sharing the spotlight in the co-main event with lightweight contenders Edson Barboza and Paul Felder. And with plenty of other young talents getting ready to fight on this stacked card, there’s a really good chance that the night will be full of fireworks.

So, if you’re interested in checking out UFC 242 and don’t know where to start, we have you covered. Read on to find out how to watch the fights, regardless of where you are.

To watch UFC 242, you’ll need to be willing to jump around to different streaming services all throughout the day.

Since the fights are taking place at the du Arena in Abu Dhabi, United Arab Emirates on Saturday, September 7, the early prelims will actually begin at 10 a.m. ET on UFC Fight Pass, a $9.99-per-month service that allows you to stream fights both live and on demand. The Early Prelim fights will be followed by the Preliminary Card, which will air on FX at noon, and then be followed by the main event on UFC Fight Pass and PPV at 2 p.m. ET.  You can also catch the main card on ESPN+.

If you're traveling outside the country during UFC 242, you'll still be able to watch it. A virtual private network, or VPN, can help you connect to your desired streaming service through a U.S. server and watch the draft as if you were at home.

Here are three VPN options worth considering, should you need them during UFC 242.

Cheap and secure, NordVPN is just $2.99/month for a three-year contract, uses 2048-bit encryption, and makes it easy to use streaming services.View Deal

Costing $6.49 per month for a one-year contract, IPVanish lets you have up to 10 simultaneous connections, and works on Mac, Windows, Android and iOS.View Deal

How can I live stream UFC 242 without a cable or satellite subscription?

To effectively stream the fights and not miss a single moment, you’ll need to tune in from UFC’s Fight Pass, which costs $10 per month to access the company’s live-streaming fights, as well as an archive of bouts from previous events. It’s available on a slew of device types, ranging from smartphones and tablets to your favorite sett-top box. You can also catch the main card on ESPN+.

Since the prelims are on FX, you’ll need to find a streaming service to actually watch the fights on the popular networks. Here’s a look at the services that work with FX:

Hulu + Live TV: Hulu's Live TV package costs $45 per month for 60 channels, including FX. You can also record up to 50 hours of programming to Hulu's cloud DVR.

Playstation Vue: With a $45-a-month PlayStation Vue subscription, you can stream FX through the service's Core tier, which is the higher-level package from PlayStation.

How can I watch UFC 242 with a cable or satellite subscription?

If you want to watch UFC 242 on television, you won’t get the full card, since the Early Prelim round is only available on the UFC Fight Pass service UFC offers its customers for $10 per month. However, if you can get past that, you can watch the event live on FX, which is usually available with standard cable and satellite packages.

When it’s time to watch the event on PPV, simply go to the specified channel on your dial and purchase it. You can also sign up for ESPN+, ESPN’s paid service which costs $50 per year. You can get a package deal of ESPN+ and UFC 442 for $80, a 25% discount off the full value of $110.

If you just want the PPV on your television, you can order it for $59.99 plus tax.