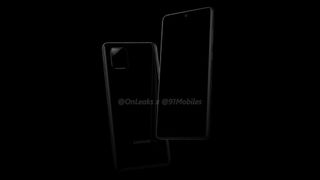 It may not be the best of views, but we now have our first reasonable look at what Samsung might have planned for the Galaxy Note 10 Lite.

The folks over at 91Mobiles and OnLeaks have published images of what they say are official renderings of the smartphone Samsung has planned. Oddly enough, the renderings are shadowy, so while we can see some basic features, like a big camera area, we can't make out fine detail.

The first thing you will notice in the leak, however, is that the device appears to come with a familiar Samsung design, complete with a rectangular form and a screen that looks to entirely cover the smartphone's face. It's hard to tell from the render how big the bezel and chin will be, but chances are, they'll be small.

The front-facing camera isn't too easily visible, but it appears to be at the top-center of the screen. It looks like a punch hole camera. Moreover, because there's no physical fingerprint sensor, we can expect a virtual fingerprint sensor to be hiding under the display.

On the rear, you'll find a big camera bump at the top-left of the panel. We can't tell from the renderings how many cameras it might have, but OnLeaks says Samsung is planning a triple-lens camera array.

Arguably the most surprising feature is what's on the bottom of the device. In addition to the S Pen (this is a Galaxy Note, after all), the rendering clearly shows a headphone jack — a feature that Samsung and Apple have removed from their most recent high-end phones.

Samsung might have decided to keep the headphone jack this time around because the Galaxy Note 10 Lite will be a more budget-friendly device that could appeal to markets where wireless headphones are not nearly as ubiquitous as wired headphones.

Samsung's Galaxy Note 10 Lite is expected to find its way to store shelves sometime this month, and perhaps as early as next week. When it launches, it could have a 6.7-inch screen and the same power you'd find in the Galaxy S9 lineup. Pricing is unknown, but be sure to check back here on Tom's Guide to find out all the details if and when the Galaxy Note 10 Lite is unveiled.