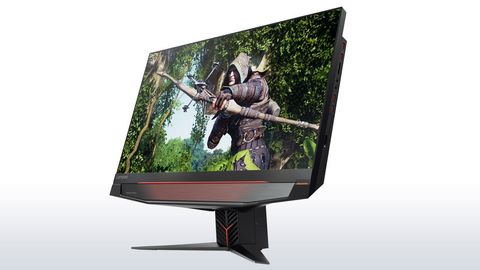 The Lenovo IdeaCentre AIO Y910 is a fantastic gaming all-in-one that offers VR-ready performance, a RealSense camera and an upgradable design.

Gaming all-in-ones often feel like a big compromise: Many of these machines feature huge, gorgeous screens, but those displays usually can't do a whole lot because of their weak graphics muscles. With Lenovo's IdeaCentre AIO Y910, that's no longer the case. This is a full-fledged gaming PC in every way, featuring a VR-ready Nvidia GeForce GTX 1080 graphics card, a fast Intel Core i7 processor and an upgradable design that lets you swap in newer components over time. Factor in its 3D-scanning RealSense camera, sharp quad-HD display and reasonable price, and you've got the best all-in-one computer for gamers.

The IdeaCentre Y910 finds a sweet spot between the hyperaggressive design of Lenovo's Y Series gaming products and the company's more family-oriented all-in-ones. The PC's scaly vents and red "Y" logos aren't nearly as pronounced as they are on Lenovo's gaming towers, and I really dig the subtle red highlights of the harman/kardon speakers just below the display.

The Y910's bezels are impressively thin, and are complemented by some neat hidden features. The all-in-one's webcam (more on that later) pops out of the top of the display, and there's a small dongle that you can pull out of the left edge to hang your headphones on.

The Y910 is similar in size — but not quite as elegant-looking — as MSI's Gaming 27T all-in-one, and can't hold a candle to the supersleek Asus Zen AiO Pro. Still, Lenovo's desktop is far from ugly.

The Y910 has all of the ports you need to plug and play, with two USB 3.0, two USB 2.0, a 6-in-1 card reader, headphone and mic jacks, and a DVD-R drive all located conveniently on the right side of the screen. In the back, you'll find two additional USB 3.0 ports, an Ethernet jack, and HDMI in and out ports.

The Y910 not only doubles as a stand-alone monitor (thanks to its HDMI-in port) but also has all of the connections you need to plug in an HTC Vive or Oculus Rift.

Easy upgradability is a hallmark of Lenovo's gaming towers, and I was pleased to discover that it was just as painless to pop open the Y910 and swap out components. After pressing each side of the big "Y" button in the back, I easily slid off both halves of the PC's rear panel. From there, you can swap out the RAM, storage drives and GPU with minimal hassle.

Although changing the graphics card requires you to unscrew a few things (the RAM and storage can be replaced tool-free), I was still overwhelmingly pleased to have so many upgrade options on a type of machine that usually offers none.

The Y910's 27-inch, 2560 x 1440 display proved equally satisfying for blasting through games and kicking back with movies. Rise of the Tomb Raider looked fantastic at 1440p on the desktop's huge screen, which allowed me to spot the individual strands of Lara's snow-speckled hair and made the game's lighting effects really pop.

I was similarly impressed while watching the trailer for Rogue One: A Star Wars Story. Everything from the bright-orange explosions to the crystal-blue beaches of Scarif looked very vibrant, and I could make out every angry wrinkle in Director Krennic's face.

Lenovo's desktop also performed fairly well on our color tests, reproducing 129.6 percent of the sRGB color gamut with a Delta-E color accuracy score of 2.58 (closer to 0 is better). The Asus Zen had a lower, 99-percent gamut but was far more accurate, at 0.21. The MSI was similarly strong, at 117 percent and 1.26 Delta-E.

The only knock I can really give the Y910's display is that it's not 4K. Although quad HD is an ideal resolution to play games using these specs, the Y910's GTX 1080 graphics are perfectly capable of churning out 4K performance at decent frame rates. And although the desktop's internals are upgradable, you'll always be stuck with the same screen.

The Y910's harman/kardon speakers are impressively loud but offer mixed audio quality. The PC's speakers filled our testing lab with the sounds of Rise of the Tomb Raider, allowing me to easily hear where enemy chatter was coming from. Explosions, gunfire and the snap of Lara Croft's bow and arrow all generally sounded crisp, though those sounds became a bit distorted with the volume maxed out.

I had a similar experience with the Doom soundtrack, whose heavy metal riffs sounded crushingly loud and delightfully sharp for the most part but occasionally got muddy at higher volumes. I also found the bass a bit lacking.

The Y910 features a hidden Intel RealSense 3D camera that pops out of the top of the display, which allows for some extra privacy and keeps the top bezel superthin. Intel's 3D-scanning webcam is an excellent fit for Lenovo's gaming all-in-one, providing neat features for streamers, gamers and anyone who simply wants to create silly 3D recreations of themselves.

With the help of Personify's Chroma app, the Y910's depth-sensing camera allowed me to completely cut the background out of my shots and place myself in front of a beach, a bunch of fireworks or whatever other image I wanted. This functionality could be very useful for Twitch streamers, as RealSense cameras let you superimpose yourself on your gameplay without the need for a fancy green-screen setup. This effect produces a bit of jaggedness that you won't see from more expensive streaming hardware, but it's a nice way to get started.

Thanks to its ability to track gestures, the Y910's camera also does a nice job of turning your body into a game controller. When playing Car Rush, a basic racing game, I accelerated by tilting my head forward and turned by moving side to side. Most current RealSense games are similarly basic, but they hint at a ton of immersive potential that I'd love to see AAA developers tap into.

The Y910's webcam offers decent picture quality; it did a fine job of capturing my facial stubble and green flannel shirt despite a bit of blurriness. It will serve you well for Skype calls and Twitch streams, though broadcasters seeking professional-level quality should consider a dedicated webcam such as the Logitech C922.

Having used tons of "gaming" all-in-ones that were stuck with underwhelming mobile GPUs, I found that playing on the Y910, with its full-blown Nvidia GeForce GTX 1080 card, was a treat. With Gears of War 4 cranked to 1440p at Ultra settings, I was gleefully bouncing between cover and blowing up enemy robots at up to 90 frames per second while admiring the lush military base that served as my arena.

The Y910's everyday gaming performance was strong, but what impressed me more was that it could handle high-end virtual reality with ease. The desktop scored an 11 on the SteamVR Performance Test, which puts it on a par with other GTX 1080 machines such as the Y900 and the Alienware Aurora. That score is what Valve calls "well above what is needed for high-quality VR," and is the highest rating we've seen yet.

Thanks to its Intel Core i7-6700 processor and 16GB of RAM, the Y910 is as much of a multitasking monster as it is a gaming PC. The all-in-one never slowed under the weight of whatever I threw at it, even as I bounced among more than a dozen browser tabs, watched four Twitch streams, downloaded a game and ran a full system scan all at once.

On our spreadsheet test, Lenovo's desktop matched 20,000 names to their addresses in 3 minutes and 15 seconds. That's just behind the Zen AiO Pro (3:34) and far ahead of our 7:30 all-in-one average.

The Y910 ships with a standard-issue Lenovo keyboard and mouse, so you'll have to bring your own tools to battle if you want to use something more specialized for gaming.

The included keyboard works fine for everyday tasks; its Chiclet-style keys are big and comfortable, and allowed me to breeze through a typing test at 98 words per minute with very minimal errors.

Lenovo's mouse is similarly satisfactory, with curvy, ergonomic edges; an accurate sensor; and a responsive scroll wheel. You won't find mechanical keys or extra action buttons on these packed-in peripherals, but if that's your priority, you probably already own a gaming mouse and keyboard.

The Y910 is pretty light on preloaded software, bundling most of its gaming features into a central hub via the Lenovo Nerve Center app. This tool lets you quickly glance at your system's specs and performance load, as well as tweak display, network and audio settings.

Other than that, you get the usual CyberLink media-burning apps that come with most Lenovo PCs, as well as Lenovo Solution Center for checking on your system's health and getting access to customer support.

With the IdeaCentre Y910, Lenovo has eliminated any stigma you might associate with a gaming all-in-one. This PC's Core i7 processor and GTX 1080 GPU can handle VR and play the latest games at cranked-up settings, and come packaged in an elegant, upgradable design complete with a gorgeous quad-HD screen and a 3D-scanning webcam. It's remarkable that you can get all this for $1,999, especially considering that you'll pay about the same for Lenovo's Y900 tower — and you'll still have to buy a monitor for that machine.

The Y910's only major drawback is that its non-4K display could become outdated over time, especially considering that the rest of the machine is designed to stay current. Still, the Y910 should be at the top of your list if you're seeking an all-in-one. It's not just a great gaming machine — it's one of the best PC values out there.