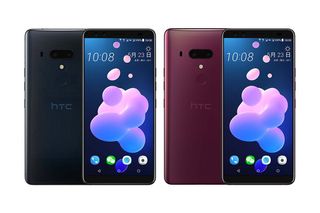 HTC is planning a launch event May 23 where it's expected to release its latest smartphone. But if you spent any time on Twitter this morning (May 17), all the mystery is gone from the upcoming HTC U12+ release.

That's because leaker extraordinaire Evan Blass took to Twitter this morning and, in a pair of tweets, revealed everything you need to know about the HTC U12+, which looks like it's going to be the main focus of next week's launch event.

First, Blass posted leaked promotional images of the phone, which appears in three different colors — black, a kind of bluish gray, and a reddish pink version. Blass followed up by tweeting the HTC U12+'s spec sheet, outlining almost every detail about the upcoming device.

If you've found your eyes rolling heavenward as a parade of new phone releases have appeared sporting an iPhone X-style notch, the HTC U12+ looks like it's offering some relief. Blass's latest leaked images show a notch-free display with minimal bezels on the edge of the phone. That squares with previous leaks.

According to the posted spec sheet, the HTC U12+ will be powered by Qualcomm's top-of-the-line Snapdragon 845 chipset, augmented by 6GB of RAM. The phone looks like it will come in 64GB and 128GB configurations, with a microSD slot capable of boosting storage to 2TB.

Front-line phones these days feature dual rear cameras, and the HTC U12+ won't be an exception, with the spec sheet detailing a 16-megapixel telephoto lens augmented by a 12-MP wide-angle shooter. That will allow the U12+ to offer a 2x optical zoom. HTC's press materials also tout phase detection coupled with laser autofocus, so expect HTC to talk about sharper photos when the U12+ is unveiled.

HTC sounds like it's doubling up on dual cameras, though, with a pair of shooters also occupying the front of the camera. Those will be two 8-MP shooters, a feature we've seen in other phones such as Sony's Xperia XA2 Ultra.

As for special features, HTC's spec sheet includes an extensive section on audio, which would be keeping with past phone releases from the company that have touted the phones' booming sound. Like the HTC U11, the U12+ will have always-on listening support for both the Google Assistant and Amazon's Alexa.

As detailed as the spec sheet may be, it doesn't reveal the asking price for the HTC U12+. That may be a detail we'll have to wait until next week to hear about.

Spec sheets may give us an inkling of what features to expect from a phone, but they don't exactly explain how HTC hopes to make its device stand out from similarly-equipped flagships. That's something we're hoping to hear on May 23, when HTC officially reveals its new phone.