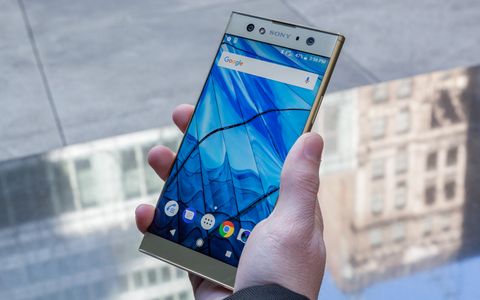 Recent smartphones from Sony have saddled otherwise powerful and pleasing-to-use smartphones with outdated designs and a lack of critical features. Its last flagship device, the Xperia XZ1, was a perfect example; although we loved shooting with its super slow-motion camera, it was incredibly bulky to hold and didn't even come with a fingerprint sensor.

Sony's new midrange offering, the Xperia XA2 Ultra, attempts to right some of those wrongs. For one, there's actually a working fingerprint sensor on the back. And although the XA2 Ultra still has a conventional 16:9 display, the bezels have been trimmed a hair, yet are still wide enough to support dual front-facing cameras.

Unfortunately, it's not enough. The XA2 Ultra simply feels like more of the same. Worst of all, at $449, it's far too expensive for what you get.

What does the Xperia XA2 cost?

The Xperia XA2 Ultra is the larger version of Sony's 5.2-inch $349 Xperia XA2, and retails for $449. For that, you get Qualcomm's snapdragon 630 processor mated to 4GB of RAM and 32GB of storage with a microSD slot. The phone is available GSM unlocked, making it compatible with the likes of AT&T and T-Mobile, but not Verizon and Sprint. You can pick it up from Best Buy, B&H and Amazon.

Design: Beware of the bulk

Sony's upcoming flagships, the Xperia XZ2 and XZ2 Compact, figure to bring the design overhaul the company's mobile lineup so desperately needs. But until they launch later in the year, we're simply left with the XA2 Ultra in all its cumbersome glory.

Weighing a little less than 8 ounces and measuring 6.4 inches tall and 3.1 inches wide, the XA2 Ultra is bigger than Samsung's Galaxy S9+ in every dimension, except for active screen real estate. Although Sony's 6-inch display may seem more manageable on paper than the 6.2-inch panel on the S9+, the Xperia's traditional 16:9 aspect ratio makes it squatter but infinitely more difficult to reach across. This is not a phone most of us could ever hope to use one-handed.

The XA2 Ultra is clearly a product of Sony's outgoing expression of design: thick bezels, sharp corners and absolutely no personality whatsoever. I suppose the device might look imposing in black, but our gold unit gives  the impression of trying too hard to look high-end while simultaneously failing to persuade anyone that it actually is.

The materials don't help the cause, either. Sony relied on metal along the perimeter and plastic for the back. It has the appearance of aluminum, which I suppose is better than not, and enough middling budget phones with metal bodies have passed through my hands to the point where the plastic actually doesn't offend me much. It probably keeps the XA2 Ultra from being even more overweight than it already is, so that's good.

The XA2 Ultra is clearly a product of Sony's outgoing expression of design: thick bezels, sharp corners and absolutely no personality whatsoever.

But aside from the headphone jack, Sony's signature hardware camera button, and the aforementioned fingerprint sensor, there's absolutely nothing noteworthy about the XA2's Ultra design. It isn't even water resistant.

Display: Brighter than the sun

The XA2 Ultra's 6-inch 1080p LCD display is as well-rounded as you'll find at this price. Although the resolution is a bit low considering the display's size, the Xperia's panel more than makes up for that shortcoming with excellent outdoor visibility and proper color calibration.

The brightness impressed us the most. At a peak of 602 nits, the XA2 Ultra can get roughly 15 percent brighter than the HTC U11 Life and the Moto X4 Android One,  both of which also claim really nice screens. That's even better than the iPhone X, with its 574-nit max.

The Xperia's hues are spot-on too, with a Delta-E accuracy rating of 0.36. (Numbers closer to 0 are better.) The XA2 reproduced 151.3 percent of the sRGB color spectrum in its Standard display profile. This mode gives saturation a little lift, but doesn't boost it as much as the Super Vivid setting, so I find it to be a nice middle ground.

At a peak brightness of 602 nits, the XA2 Ultra's screen can get roughly 15 percent brighter than the best phones in its class.

Like so many smartphones today, the XA2 Ultra has dual lenses — though they aren't located where you'd expect them.

Above the screen are a pair of 16- and 8-megapixel front cameras. Unlike so many multi-lens setups, they strangely can't be used for portraits with bokeh effects, although they do allow you to switch perspectives on the fly. The main 16-MP sensor features optical image stabilization and employs a narrow perspective, while the secondary shooter has a 120-degree field of view, making it ideal for group shots.

Selfies on the XA2 Ultra appeared a fair bit sharper with stronger contrast than those taken on one of our favorite midrange phones for photography, HTC's U11 Life. However, the Xperia's increased saturation gave my face a splotchy skin tone that I could have done without. Although Sony's handset doesn't feature a dedicated portrait mode, the front-facing shooter subtly blurred the tree  in the background. It was a nice stylistic element missing from HTC's rendition.

But the XA2 Ultra really demonstrated the worth of its front-facing array in low light, when its flash came into effect. Sony's phone produced a brighter, crisper shot in our dimly lit video studio compared to the U11 Life, which has no flash and had to rely on heavy post-processing and smoothing to achieve a comparable result. Again, though, I must complain about the XA2 Ultra's lighting and color balancing, which painted pink shadows under my eyes, as if I hadn't slept for a week.

For one last selfie test, I grabbed my colleague Henry for a quick comparison between the normal and wide-angle lenses on Sony's handset. The perspective on the secondary camera provided a nice change of pace from the selfies you get from most phones, and helps you include more people in the shot when necessary or capture more of the background. Images taken in this mode also automatically employ a wider aspect ratio, so all that extra content in the frame doesn't go to waste.

Unfortunately, the XA2 Ultra's 23-MP, f/2.0 rear camera struggled considerably more than its selfie shooters, opting for dim exposures that frequently muddied details in the shadows, even in outdoor light.

The U11 Life outperformed Sony's best efforts across the board. In our offices using HDR mode on both devices, the XA2 Ultra delivered oversaturated yet cool colors and a slight haziness that negated its megapixel advantage over HTC's 16-MP phone. This was particularly noticeable in the leaves of the plant, which lacked texture on the Xperia. Even worse, the XA2 Ultra took 2 seconds longer on average to process HDR shots.

The situation didn't improve when we ventured into Bryant Park, which was coated in snow after yet another nor'easter. The XA2 Ultra failed to capture the green of the umbrellas and the pastel tones of the chairs, while the plants toward the left edge of the frame were completely underexposed.

Mercifully, the Xperia clawed back some credibility in this final shot, thanks in large part to much better lighting. However, zooming in revealed many familiar pitfalls. Everything from the imperfections in the surface of Gertrude Stein's statue, to the sign in front and even the tree trunk was smoothed over. It'd be passable for a budget phone costing half the price, but $449 is simply too much to pay for a camera this poor.

Performance: Powerful, but not for the price

These days, it's not uncommon to see $500 handsets powered by flagship chipsets, like the OnePlus 5T and Honor View 10. The XA2 Ultra isn't quite as expensive as those phones, at $449, but it's very close.

However, inside you won't find one of Qualcomm's premium Snapdragon 800-series processors, but instead a more modest Snapdragon 630 and 4GB of RAM. The 630 is no slouch, and likely able to satisfy most users' needs with a strong enough performance for everything but the most demanding games. But given what some comparably priced phones are packing, it's not the best value out there.

The problem is, those phones cost at least $50 less than Sony is asking for the XA2 Ultra. The U11 Life retails for $349, the same as the smaller XA2. And while Motorola normally charges $399 for the X4 Android One, that model is actually going for $249 right now through Google's Project Fi network, which is a steal.

Despite the Xperia XA2 Ultra's large footprint, the phone only features a 3,580 mAh battery. That's decently sized, but considerably smaller than what you find in other big handsets, like Asus' 5,000-mAh ZenFone 4 Max.

Thankfully, the XA2 Ultra still delivered lengthy performance on a charge, clocking 12:46 in our battery test, which consists of endlessly streaming websites over T-Mobile's LTE network. It's a strong result, no doubt, and good enough to land the XA2 Ultra in our top 10 longest-lasting phones. However, we wish Sony pulled it off with a battery that was quicker to charge.

A drained XA2 Ultra reached just 19 percent after 15 minutes of charging using the stock wall adapter. It hit 30 percent after 30 minutes, and 56 percent at the end of a full hour. The fastest-charging devices can almost completely top off their batteries in the same amount of time it takes Sony's to cross the halfway mark, so some form of quick-charging support would have really gone a long way here.

The XA2 Ultra comes with Android 8.0 Oreo. And while it's not the newer Android 8.1 featured in Google's Pixel handsets, the Honor View 10 and the Essential Phone, it thankfully isn't Nougat, which can still be found in a glut of lower-end devices on sale these days.

However, Sony's approach to Oreo seems a bit stale compared with the competition's. That's mostly because the company has been running the same interface on its Android phones dating back to the Marshmallow days, without any significant visual or functional changes.

Granted, the Xperia flavor of Android has always been a relatively light touch on stock Android, and it isn't anywhere near as drastic as Samsung's or Huawei's tweaks. Under the hood, everything you expect in Google's sandwich cookie-inspired OS is still there, like notification dots, picture-in-picture and contextual actions for highlighted text.

Indeed, this is Oreo — even if it doesn't look the part. Sony is still committed to its own suite of media apps and branding exercises you'll probably never use, like the Xperia Lounge. There you'll find apps, content and themes curated by the company, many of which are already accessible in the Google Play Store.

Aside from a bright screen and the latest major revision of Android, there's very little the Xperia XA2 Ultra does that would compel you to choose it over its competitors.

Other devices simply promise more for the money. Take the $199 Honor 7X or the $279 Moto G5S Plus, for example. These are two well-rounded handsets that are just about as powerful as the XA2 Ultra where it counts, except they feature modern designs and feature-packed dual lenses.

If you have a little more cash to burn, $349 gets you the HTC U11 Life and its best-in-class camera, not to mention Sony's own smaller XA2 with the same processor as the Ultra, only with 3GB of RAM and just one selfie lens. You could also splurge on the newly released Honor View 10 or the very pretty Essential Phone, all of which guarantee flagship-caliber specs for just $499.

Like a troubling number of Sony's handsets lately, the Xperia XA2 Ultra is simply too expensive given how dated it feels. And until the company can figure out a way to turn that around, it's going to be very hard to recommend its smartphones.