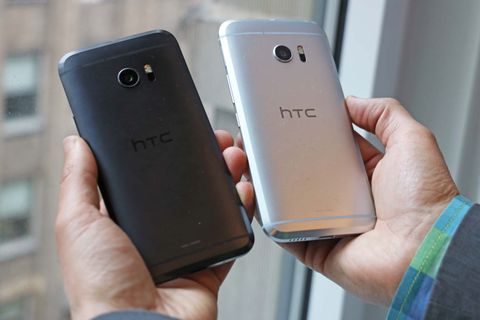 With better cameras, design, audio and software, the HTC 10 is a significant upgrade for smartphone buyers and the brand.

A perfect 10? Nope. But the HTC 10 is a major improvement over last year's HTC One M9, which earned a score of just 5 out of 10 from us, due to its sharp edges, lackluster camera and short battery life. HTC's new flagship ($699 unlocked) sports a head-turning metal design, improved cameras and better performance. Plus, there's a very cool personal audio profile feature that tailors music to your ears. But while the HTC 10 is a solid effort and a vast upgrade from its predecessor, it doesn't beat the class-leading Samsung Galaxy S7.

Design: Shinier, with Some Flaws

Like previous HTC flagships, the HTC 10 is carved out of a single block of aluminum, resulting in a sharp piece of eye candy. We tested a silver unit, but the HTC 10 also comes in a stylish black, which I prefer. While I'm not a fan of the new shiny, sloping edges on the HTC 10's slightly curved rear, I appreciate how easy that makes it to grip the phone.

The matte finish on the rest of the phone's back is classy, and HTC's logo looks elegant. HTC placed the volume and power buttons on the right side of the phone, with the power button sporting a ridged texture. This makes the button easy to find without looking, but some of my colleagues hate how sharp it feels.

Oddly, HTC decided to put the headphone jack in the middle of the top side, as opposed to on the bottom corner as on other smartphones. As a result, your headphone cable can dangle in front of your screen when plugged in.

I love the capacitive home button; it's etched out and easily located by touch. Plus, you don't have to physically press down to engage it or the embedded fingerprint sensor. You can unlock the phone just by laying your finger on the fingerprint sensor, without first having to wake up the device with a push.

Camera: Great, But Not in Low Light

The HTC 10 has a seriously improved camera, and is now armed with a 12-megapixel sensor, larger 1.55-micron pixels and a wider f/1.8 lens aperture. This new setup made for bright, vibrant photos, evidenced by the crisp windows in far-off buildings and the deep-green field in Manhattan cityscapes.

Compared to our current favorite smartphone camera in the Galaxy S7, though, the HTC 10 pales a little. Samsung's shooter delivered a deeper blue sky, richer red buildings and crisper details.

However, the HTC 10 rendered colors more accurately than the Galaxy in other settings. Samsung's phone delivered a slightly yellow tinge in a photo of my colleague at dinner, while the HTC model produced truer hues.

A laser autofocus is supposed to assist the HTC 10 in swiftly taking sharp shots, but it often proved finicky in my testing. At times, a warning that the laser autofocus was obstructed would show up, even when my hand was nowhere near the camera. It turned out that a speck of dirt had landed on the sensor, preventing it from focusing. You'll want to wipe down the camera and autofocus sensor from time to time for better shots.

Despite the larger microns and wider aperture, the HTC 10 struggled to take a good picture in low light. My shots of New York City buildings at night were marred by numerous light streaks from street lamps and passing cars.

The streak remained even after I wiped the camera's lens. The Galaxy S7's photo of the same scene didn't look nearly as bad.

I shot this gorgeous nightscape from my balcony and still saw similar light sensitivity on the HTC and the Samsung. The Galaxy also delivered warmer and richer, but slightly less accurate, colors in low light.

The HTC 10 is capable of recording 4K video with high-res audio, and the clip I shot of Manhattan traffic showed great clarity and color when I viewed it on the phone's quad-HD display and my full-HD desktop monitor. Other than doing a slightly better job of picking up environmental sounds, I didn't notice a huge difference when recording with hi-res audio compared to without hi-res audio.

Optical image stabilization is becoming a common feature for the rear cameras on high-end smartphones, and the HTC is no exception. But it's also the first phone to add stabilization to the front camera as well. As a result, the HTC 10's 5-MP front camera took colorful selfies that were tack sharp. Each strand of my hair was clear, while the teal stool behind me looked accurate.

In low light, the selfie cam continued to shine, taking a crisp portrait even on my pitch-black balcony. In comparison, the Galaxy S7 Edge snapped a warmer, more vibrant shot but failed to capture a sharp pic.

Both the Galaxy S7 and the HTC 10 offer selfie flash features that light up your display to brighten up your visage. HTC's version was much more neutral and balanced than the Galaxy's, which made me look washed out and green.

By default, HTC's selfie cam turns on a 2-second timer for every shot, while its beautification tool is disabled. Activate the beautification feature, and you'll get a slider that lets you decide how intense you want the edits to be.

I enjoyed watching YouTube videos and looking at pictures on the HTC 10's 5.2-inch 2560 x 1440 display. A 2560 x 1440 trailer for TimeScapes depicted crisp drops of water falling down a waterfall and a vibrant red sunset. Viewing angles were ample, and image quality did not degrade as I tilted the phone from side to side.

Registering 371 nits on our light meter, the HTC 10's screen is dimmer than the average smartphone (437 nits), as well as the Galaxy flagships and Apple's high-end iPhones. The HTC did outshine the LG G5 and the Nexus 6P, though.

HTC continues to be the only major smartphone maker to focus on delivering a solid audio experience. On the HTC 10, the company tweaked the previously dual front-facing speakers by moving the lower one to the bottom edge of the phone. The top speaker on the front of the device handles top notes, such as trebles, while the bottom-mounted speaker takes care of bass tones.

The HTC 10 had no trouble pumping out music loud enough to fill a medium-size meeting room, and it made The Weeknd's "In The Night" and Iggy Azalea's "Team" sound crisper and fuller than the speaker on the iPhone 6s. HTC's flagship offered noticeably stronger reverb and bass boost than the iPhone. You can also choose between the included Dolby Music and Theater sound modes.

But the best new feature on this phone is HTC's new personalized audio profiles. They're so cool that I want to listen to my music on the HTC 10 instead of on my iPhone 6s.

All you need to do to set up your audio profile is plug in your headphones and listen to a set of tones from low to high, and adjust the volume until you can faintly hear each tone in each ear. Then, when the profile is activated, your phone's sound will be tailored to your hearing and the headphones you've plugged in.

I set up profiles for my Apple earbuds and AKG headphones, and my music sounded fuller with a more noticeable bass boost with the enhancement on. You can also enable Dolby's headphone effects with your profile for a more significant surround-sound effect.

Running Android 6.0 Marshmallow with HTC's Sense UI overlay, the HTC 10 comes with some features the company's fans will find familiar.

For instance, BlinkFeed still shows up when you swipe to the left of your home screen to display aggregated news based on your social and browsing activity.

A cool new Freestyle Layout option lets you get creative when you customize your phone's interface. Freestyle gets rid of the grid-based icon layout entirely, conveniently letting you put stickers anywhere on the page to launch apps. As someone who's always looking to personalize my phone in the most unique ways, I love this feature.

You'll also get HTC Boost+, a new management app that can lock specific apps, maximize battery life and cut down on the power drain caused by programs running in the background. Like Samsung's Game Launcher, Boost+ also offers a Game Battery booster mode that drops gaming resolution to extend battery life during gaming.

Performance: Among the Best

All of the cool Android kids these days pack a 1.59-GHz quad-core Snapdragon 820 CPU and 4GB of RAM, and the HTC 10 is no exception. Thanks to that brawny setup, the HTC 10 was zippy and multitasked like a boss. Yummy-looking cartoon burgers flew out of a conveyor belt in my new favorite game, Burger Shop, and didn't even slow down when I launched a performance test in the background.

Notching 5,107 on the Geekbench 3 general performance test, the HTC 10 outperformed the average smartphone (3,210) and the Nexus 6P. Both the LG G5 and the Galaxy S7 turned in better scores, though.

On graphics benchmark 3DMark Ice Storm Unlimited, the HTC 10's result of 26,955 beat the average smartphone (15,064) and the Nexus 6P, but it was beat by both the Galaxy S7s and the latest iPhones.

Battery Life: More Than a Workday

The HTC 10's 3,000-mAh battery lasted 9 hours and 56 minutes on our battery test, which involved web surfing over T-Mobile's 4G LTE network at 150 nits of brightness.

When you finally do run out of juice, it shouldn't take very long to charge back up. Because the HTC 10 supports Quick Charge 3.0, the phone is designed to recharge to 50 percent in 30 minutes. That should be enough power to get you through a day, according to HTC's estimates.

The HTC 10 is a really good phone, even if it's not a perfect one. I especially love the new personalized audio profiles, while solid performance and an improved rear camera add to the device's appeal. However, HTC 10's camera struggles in low light, and we wish the display were brighter. As for this handset's design, it's classy but unexciting.

For $50 less, the Samsung Galaxy S7 is a better alternative, with a superior camera, a brighter AMOLED display, water resistance and swift performance. But people looking for a really sexy smartphone should get the Galaxy S7 Edge, which offers all of the advantages of the S7, along with a curved display, for $50 more than the HTC 10.

Nevertheless, if there was a most-improved award for phones, the HTC 10 would get the nod. This is a very good Android handset, especially for music lovers.