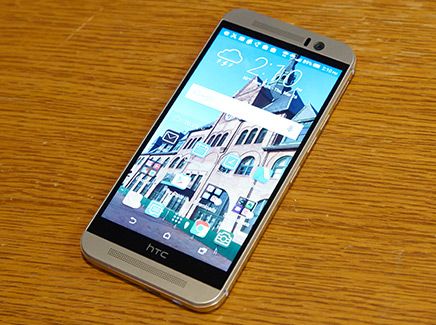 Despite innovative software and booming speakers, there's little to recommend the HTC One M9.

Who it's for: Those who are HTC fans, we suppose, but it might be time to look elsewhere.

For many, smartphones have become an indispensable part of life, yet there's very little to distinguish one person's phone from another. With the One M9 ($27.08 per month on T-Mobile or 649.92), HTC has made personalization central to its interface, letting you create a custom look based not just on superficialities, but on who you are, and what you do with your phone. If only HTC paid as much attention to the rest of the One M9 as it did with its Sense interface. Because once you start digging beneath its beautiful exterior, things start to get a little ugly.

Editors' Note: The HTC One M9 we tested rode on T-Mobile's network, but it's also available for AT&T, Sprint and Verizon.

Unlike other flagship phones from Apple and Samsung, HTC has stuck with pretty much the same design for the One for the past three years. In some respects, that's not a bad thing; I really like the all-aluminum case and large front-facing speakers. However, some of the tweaks it made this year feel like missteps.

Although its slightly smaller size (it's 1mm narrower and shorter than the HTC One M8) makes it, in theory, easier to hold than its predecessor, sharp ridges running around the sides of the M9 felt like it was digging into my hand. It also makes the phone look as if it had been inserted into a metal case. I really wish HTC had extended the gold sides all the way to the top.

Still, the thinner width of the M9 (2.7 inches) let me stretch my thumb all the way across the screen without it feeling like I was going to rip a tendon.

Like the M7 and M8, the M9 has a brushed metal back, but the brush marks are much less prominent. My review unit had a silver back, but it's also available in a gunmetal gray. The sides are a polished champagne that's slightly more golden than the iPhone 6.

HTC smartly moved the power button from the top to the right side, below the volume buttons. Above these is a microSD card slot - take that Galaxy S6! - and on the upper left side is the microSIM card slot. Like previous HTC Ones, the top edge of the M9 is a glossy black plastic, which conceals an IR transmitter.

Deciding that 5 inches was big enough, HTC opted not to increase the size of the One M9's LCD3 display. The company also kept the resolution the same as last year: 1920 x 1080p. Although other smartphones have higher resolution panels -- such as the Samsung Galaxy S6's quad HD display -- 1080p is plenty for me at this size.

Movies and videos looked great on the One M9’s screen -- so long as you viewed them head-on.  Tilting the phone to either side made the display turn a grayish color, while the S6 and iPhone 6’s colors remained true.

The most defining feature of the HTC One has been its front-facing BoomSound speakers. Not only are they louder than other smartphones, but they produce music and audio that's richer and better defined. The M9 continues that tradition, and adds Dolby Audio, creating an even more potent mix.

The speakers performed well across a variety of genres. Kenny Loggins' twangy guitar balanced well with vocals on "Footloose," and there was better-than-average bass. Likewise, you could hear every strum in the intro of Rick Springfield's "Jessie’s Girl."

While bass wasn't booming, it was more than present in Jay-Z's "Run This Town" without overwhelming Rihanna's vocals, which floated over the beats.

When playing Modern Combat 5, the speakers were startlingly loud. Gunfire and explosions really leapt out of the phone in way I didn't expect.

In Settings, you can change between Music and Theater mode -- the former concentrates the sound directly in front of you, while the latter spreads it out -- but considering audio is such a big component of this phone, I wish there were an easier way to access these settings, and make other adjustments.

The HTC One M9 runs on Qualcomm’s newest mobile processor, the Snapdragon 810, with 3GB of RAM. The phone generally performed well -- games such as Modern Combat 5 streamed smoothly, and I could swipe from BlinkFeed to the home screen swiftly. However, opening Recent Apps took a beat too long; the thumbnails faded into view. Likewise, launching the camera app from the home screen was a hair slower than the S6.

In our real-world VidTrim tests, the differences were equally apparent. The M9 took 4 minutes and 44 seconds to transcode a 1080p 204MB video file to 480p -- essentially the same time as the HTC One M8. In comparison, the Galaxy S6 took just 2 minutes and 25 seconds.

HTC has never been shy about skinning Android with its own interface, but its approach has become progressively refined. HTC Sense 7.0, which sits on top of Android Lollipop, adds a few new features without getting in the way.

The most useful of Sense is its location-awareness. The One M9 knows if you're at home, work, or out and about, and will suggest apps based on where you are, and what you've downloaded in the past. For example, when it sensed that I was in the office, it suggested Evernote, OneNote and LinkedIn, among others. After I downloaded Modern Combat 5 and Pandora, those suggestions changed to other games and lifestyle apps, such as Candy Crush and Seamless.

If you're out and about, and it's close to dinner time, Yelp recommendations of nearby restaurants will appear on the lock screen. Another nice touch? The Recent Downloads folder on the main screen, which shows the eight most-recently downloaded apps.

HTC lets you customize the look of the phone through its Themes utility. After creating a free HTC account (or by signing in with Google or Facebook), you can choose from dozens of themes, all with their own color palettes and icons.

You can also create your own theme based on a photo stored on the phone. Themes will pull the dominant colors from the image, and use them to color the icons. After selecting an image of a brick building with a copper roof and blue sky, the app then made the backgrounds of icons tan, blue and green. You can even go further and change the look of the icons, sounds and colors, and eventually, HTC will let users publish and even sell their themes online.

HTC's Flipboard-like news app returns, giving you a customized news feed when you swipe from the left side of the Home screen.

I use Flipboard a lot, so I think BlinkFeed is a really useful tool.

For the M9, HTC moved its Ultrapixel camera (which excels in low light) from the back of the phone to the front. The rear camera is now a sharper, 20-megapixels shooter (up from 4 MP). As we've seen, though, pixels aren't everything. To test the M9's camera, we took a variety of photos of the same subjects with it, the iPhone 6, and the Samsung Galaxy S6.

An indoor shot of a co-worker, Valentina, came out best on the S6; the coloring of her hair, as well as her blue paisley scarf and her skin tones, were the most accurate, and the sharpest of the three phones. The iPhone produced a slightly cooler image but had blown-out highlights. The M9's picture was the worst of the three, with a sickly greenish-yellow cast and less detail.

A bouquet of flowers came out best on the S6; not only was it richly saturated, but it had by far the best contrast, and showed the finer nuances in the petals. The M9 was on a par with the iPhone 6; colors were basically accurate, but there was far less contrast and fewer details.

A photo of red apples in a black crate again looked best when taken with the S6's camera. It had the best contrast, and its higher resolution made the beads of water much crisper. The One M9's image was on a par with the iPhone 6, with perhaps a little more detail.

The M9 also came up short when we shot a group of backlit liquor bottles in a dark bar. Not only did it have trouble focusing, but it couldn't adequately adjust for the light coming from behind the bottles. As a result, they were blown out, whereas with the S6 and iPhone 6, they had a warm, amber glow.

I also wasn't impressed with the One M9's HDR mode. I took a photo looking up Fifth Avenue, with the Empire State Building in the background lit up in the afternoon glow of the sun. While the iPhone was able to keep both the skyscraper and the dark street in the foreground properly exposed, the M9 either blew out the sky -- making the ESB impossible to see -- or made the street so dark that you couldn't see passersby. On top of that, the M9 would take a few seconds to process each HDR photo, which rules it out for spontaneous shoots.

In addition to letting you easily change the ISO, exposure and white balance, the M9's camera app has a few other neat tricks. Pressing the four-circle icon in the lower right lets you switch between the traditional camera, panorama mode, Bokeh (depth of field) and Split Capture, which lets you take a photo using the front and back cameras simultaneously.

Yes, there's a Selfie mode, too.

Apps included on the One M9 include Zoe, Polaris Office 5 and Scribble. I especially like that T-Mobile's apps are automatically sequestered in their own folder. I hope the same is true with the other carriers.

Although it was billed as Sense TV on the One M8, HTC used Peel's app for its TV remote. On the M9, HTC did away with its own branding, but the Peel app remains as useful as ever if you want to ditch your traditional remote.

On the Laptop Mag Battery Test (Web surfing via LTE at 150 nits), the HTC One M9 lasted a meager 7 hours and 14 minutes. That's a significant drop-off from last year's One M8, which lasted 10:50 on T-Mobile's network.

An unlocked version of the HTC One M9 is available for $649.

Regardless of the carrier, HTC is offering "Uh Oh" protection free for one year. If the phone gets damaged by water or the screen cracks, the company will replace it free of charge. If you don't use this service, HTC will offer $100 toward the purchase of a future One smartphone.

It's not a good sign when your lead designer quits days before the launch of your flagship phone. Apart from some innovative software features, there's little to recommend the HTC One M9 over any competing device. Among other things, its edges are sharp, its screen is dimmer, with limited viewing angles, and its battery life is below average. While the One M9's audio is tops and there's some innovative personalization features, those reasons aren't enough to pick it up. While you can't add storage to the Samsung Galaxy S6, that phone has a far superior camera, a brighter display and better endurance.