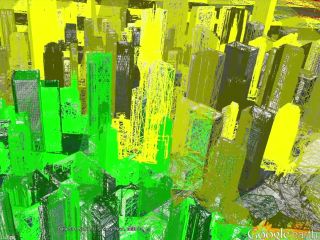 On Wednesday Google revealed an offline mode for Google Maps on Android, 3D imagery for Google Earth Mobile, and a new method for tracking all our freeways, side streets and dirt roads for Street View. Indeed, it was a busy day for the search engine giant.

For starters, Google has added an additional element to its arsenal of cameras used in Street View. Up until now, it used cars, trikes, snowmobiles and trolleys to map the entire world. But now there's Street View Trekker, a camera system that's mounted on a backpack. This means Google can set out on foot and photograph places that were inaccessible by vehicles like portions of the Grand Canyon or the North Pole. In the provided image (right), Luc Vincent, engineering director, is taking the Street View Trekker for a trial run in Tahoe. Looks heavy, no?

With better means of mapping the globe, Google can now focus on accuracy. The company admits that it has a way to go because the world is constantly changing. After all, new houses, cities and parks pop up all the time. It's a never-ending job to keep up with all these changes (not to mention way more work than Google has resources for) -- that's why Google has provided means for user feedback via the Report a Problem tool and via Map Maker tools, launched back in 2008.

"By cross-checking the data we have, we can significantly improve the accuracy of our maps," writes Brian McClendon, VP of Engineering, Google Maps, said in a blog. "Turns out our users are as passionate about the quality of Google Maps as we are, and they give us great feedback on where we can do better. We make thousands of edits a day based on user feedback through our Report a Problem tool and via Map Maker."

But as of today, these tools will be expanded into South Africa and Egypt. Ten more countries will be added in the next few weeks including Australia, Austria, Belgium, Denmark, Finland, Liechtenstein, Luxembourg, New Zealand, Norway and Switzerland, he said.

The third part of Google's Maps-based announcement, usability, concerns the mobile version for Android. In the next few weeks, users will be able to take maps offline from more than 100 countries. This will be extremely handy in situations where a data connection is unavailable such as out in rural areas or in the subway. An actual release date was not specified.

Finally there's Google Earth. The company has provided textured 3D buildings since 2006, but Google is now adding 3D models to entire metropolitan areas in the mobile version. "This is possible thanks to a combination of our new imagery rendering techniques and computer vision that let us automatically create 3D cityscapes, complete with buildings, terrain and even landscaping, from 45-degree aerial imagery," McClendon reports. "By the end of the year we aim to have 3D coverage for metropolitan areas with a combined population of 300 million people."

"I have been working on mapping technology most of my life," he adds. "We’ve made more progress, more quickly as an industry than I ever imagined possible. And we expect innovation to speed up even more over the next few years. While we may never create the perfect map… we’re going to get much, much closer than we are today."

To see the new 3D imagery for Google Earth Mobile, check out the video below: