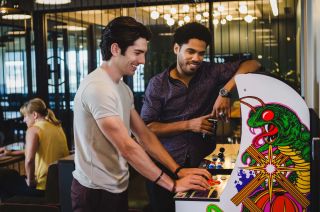 It may feel like a long time ago now, but only a few decades ago, the best device to play games on was an arcade machine. Standing in tall, heavy cabinets and operated by quarters, this was where you’d play hit games like Pac-Man, Street Fighter, Galaga and more.

While finding, purchasing and maintaining one of these old machines is the realm of true enthusiasts, Arcade 1Up offer a range of replica cabinets that let you play the popular games of the arcade period without shelling out thousands of dollars for the real thing.

Below is a guide to the different products Arcade 1Up offers, along with the games they have available, and what reviewers and users have said about them. If you're tempted to buy one after you're done, you can check out the recently announced Walmart Arcade 1Up Black Friday deal, which has discounts on many of the products you'll see below.

Arcade 1Up prices and availability

The list prices for Arcade 1Up’s main products are $299 for a standard cabinet, $200 for the counter-cades, and $499 for the head-to-head cabinets. These vary depending on the retailer and the games you choose, so make sure you have a look around before making your buying decision.

In the US, you can purchase Arcade 1Up products from Amazon, Walmart, Best Buy, Target and Gamestop, while in the UK, you have the choice between Amazon, Argos, Smyths Toy Superstores, Costco or Very.

This is the current list of games you can get on an Arcade 1Up cabinet. Most machines come with multiple games installed, but the named games are the ones that their respective cabinets are identified by in stores, and having matching exterior artwork:

The choice for Arcade 1Up’s head-to-head cabinets is as follows:

Finally, the games that are available on Arcade 1Up’s counter-cades are:

These are the standard ¾ scale cabinets (4 feet tall) sold by Arcade 1Up. They feature a 17-inch LCD display, original artwork, coinless operation, authentic controls, volume controls, and a selection menu to switch between the different games. The cabinets run from an AC outlet, and are shipped in flat boxes for you to construct yourself.

Arcade 1Up Marvel Super Heroes: was $299 now $249
From Spider-Man to Doctor Doom, play are your favorite Marvel super hero (or villain) as you try to defeat Thanos and save the universe. The machine also includes The Punisher and X-Men. It's $50 off. View Deal

The Riser is a booster to increase the height of one of Arcade 1Up’s cabinets. By default, the machines stand 45.8 inches (116 centimetres) tall, which is an ideal sitting height, but if you want to use your machine stood up, the riser will increase the height to 57.8 inches (145cm), which will be much more comfortable for the majority of people.

If you need something more compact than a full cabinet, or can’t face the idea of putting one together, the counter-cade is a pre-built 18.5-inch tall miniaturised version of a single arcade classic with an 8-inch LCD display. Like its full-size siblings, it operates via an AC connection, features controllable volume, coinless operation, original artwork and a realistic arcade joystick and buttons. These all cost $235.00, considerably less than a normal Arcade 1Up cabinet.

There were historically plenty of multiplayer games available on arcade machines, but most of these had to be played with two seperate machines connected together, or on a cramped dual controls cabinet. Fortunately, Arcade 1Up also sells arcade tables, which puts two 17-inch displays and a pair of full control decks at opposite ends of a specially designed flat cabinet with a protective cover. This way, you can actually use it as a functional table without fear of damaging the parts you need to play the games with.

The newest ‘Black Series’ models cost $499.00 to pre-order from the Arcade 1Up store, but you can find the older versions, which feature the same games, from other retailers.

Arcade 1Up reviews: what critics and fans say

If you check the Amazon review averages, Arcade1Up products vary between 3.5 and 4.5 out of 5 stars. The cabinets require some assembly once they arrive, but most reviewers say that this is fairly easy to do.

Although some users complain about the cabinets reaching them in a faulty or unplayable state, they are full of praise for the customer service teams who quickly sent out replacement parts and even full units to those affected, along with some money back for the trouble.

Other minor criticisms include the quality of the controls, the overly-high default volume, and the fact that leaving the cabinets on for extended periods of time can damage the electronics within.

As for opinions from the press, the reactions are fairly similar. VentureBeat’s Jeffrey Grubb enjoyed the overall experience, particularly the look and the compact size, but brought up the small choice of games per cabinet and the quality of the joystick. He concludes it’s great for families, but not for enthusiasts.

Will Greenwald, writing for PC Mag, took issue with the fact that the riser is a necessity despite it being an optional extra, the limited game choices and and the lack of a CRT filter option for arcade veracity. He however had an overall positive impression, praising the ease of putting the cabinet together, the build quality and the authentic looks and sounds of the cabinets.

The IGN review, written by Seth Macy, says that Arcade 1Up is appealing for people looking for a retro gaming experience, and makes positive comments about the reduced size, ease of construction, and how well the games were displayed. The only problems he found were with the minor damage to the exterior cabinet parts sustained during transit, and the fact that while the cabinet does a good job of convincing the average user, it won’t satisfy arcade machine experts.

Arcade 1Up Accessories and Spare Parts

If you already have an Arcade 1Up product, or want to buy some extras along with your new cabinet, you can buy extras such as alternative marquees and bezels to decorate your cabinet, replacement joysticks, buttons, bat tops, screens, control decks, control panel overlays, switches, spinners and PCBs in case something wears out, as well as homeware items like stools, themed lights and posters.

Should you buy an Arcade 1Up cabinet?

While the reviews indicate a few problems, there seems to be little to worry about in terms of product quality. That leaves the question of who this suits best. These are certainly not interchangeable with genuine antique arcade cabinets - but they give enough of an impression of them to bring out the nostalgic memories of a majority of players, and the changes made by Arcade 1Up make these products far more practical for home use.

They’re still pretty expensive, costing more than a brand new current-generation games console, and these are stuck with only the games pre-installed on them. However, the uniqueness of this product and the generally high level of arcade authenticity would make any of the Arcade 1Up cabinets, counter-cades or head-to-head cabinets an amazing present for gamers with an appreciation for the classics.

If you're looking to score a new Arcade 1Up machine, many top models are available at steep discounts as part of Walmart's Black Friday sale. Here are some highlights:

Arcade 1Up Asteroids: was $299 now $169
The Asteroids console includes four games in one. You get Asteroids, Major Havoc, Lunar Lander, and Tempest. It's the cheapest arcade at $169.99 and it also has the biggest discount — $130 off. View Deal

Arcade 1Up Centipede: was $299 now $179
The Centipede console packs four games in one. You get Centipede, Millipede, Missile Command, and Crystal Castles. Your job in the headlining game is to take out the fast-moving centipede before it reaches and destroys your ship. The console is $120 off. View Deal

Arcade 1Up Galaga: was $299 now $199
Galaga is an old school arcade classic that no video game fan should be without. Use your spaceship to destroy and dodge attacking aliens. Even better, save a whole $100 while doing so. It also includes Galaxian. View Deal

Arcade 1Up Pac-Man: was $299 now $249
Gobble up energy pellets while dodging conniving ghosts as you play the godfather of video games in all its arcade glory. This console includes PacMan and PacMan Plus. It's $50 off. View Deal

Arcade 1Up Marvel Super Heroes: was $299 now $249
From Spider-Man to Doctor Doom, play are your favorite Marvel super hero (or villain) as you try to defeat Thanos and save the universe. The machine also includes The Punisher and X-Men. It's $50 off. View Deal