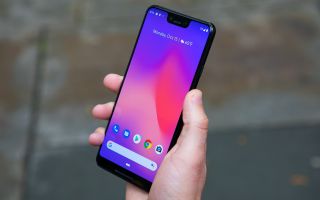 The Pixel 4 has apparently been spied out and about, but the images may be too good to be true.

UK-based site The Teen Tech posted the images you can see below, saying that they're from a flight where they sat in the vicinity of someone testing the Pixel 4 (via 9to5Google). While it’s a difficult angle to make anything much from, there is a noticeable lack of bezels, particularly on the bottom edge, and only one visible camera in the notch at the top.

The poster claims they saw the rear of the phone, which had a white back and the square rear camera bump that has been confirmed as a part of the Pixel 4’s design, which allowed them to confirm the phone’s identity. However, without any extra pictures, we can't be certain that this is indeed Google's next phone.

The Pixel 3 and Pixel 3a both have two front-facing cameras, which work together to create fancy portrait shot effects like bokeh. They manage to do this very well, with the pair both occupying spots on our favorite photography smartphone list. Moving to one camera may sound like a step backwards, but previous rumors have suggested that Google is putting other tech on the front of the phone which could make up for the second camera, in the form of Project Soli’s dot projection and IR sensors.

A large leak of information about the Pixel 4 appeared recently, including tantalising information such as a 90Hz display, air gesture control, twin rear cameras and a Face ID-style face unlocking system, alongside some basic internal hardware upgrades. However, it made no specific claims that contradict these pictures. While some official images have been posted by Google, none of them detail the screen, again making these images hard to prove or disprove conclusively.

Another recent appearance of the Pixel 4 in the real world was also reported by 9to5Google, again in the UK. This image, sent to the site by an anonymous source, only shows the back, but the camera array looks unmistakable based on previous images including those released by Google.

To stay up to date with everything we know so far about the next Pixel smartphone, our Pixel 4 rumor round-up has all the news and rumors we've heard so far.