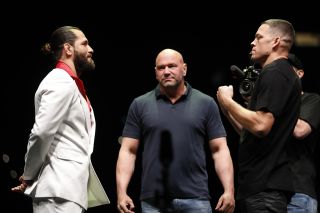 There’s plenty of drama surrounding UFC 244. Nate Diaz, one of the UFC’s top stars, will be taking on Jorge Masvidal in a welterweight bought at Madison Square Garden in New York City on Saturday, Nov. 2. And all eyes will be on whether Diaz can fend off Masvidal’s attack — and how UFC star Conor McGregor may or may not be a factor from the stands.

But it’s not only about Diaz and Masvidal. The main card also promises extremely compelling fights with middleweights Kelvin Gastelum and Darren Till, and when the big heavyweights Derrick Lewis and Blagoy Ivanov enter the octagon, there could be all kinds of fireworks.

Needless to say, Saturday will feature hours of fighting action. And if you want to watch the action live, here's our guide on how to live stream UFC 244.

Like other big UFC events, watching UFC 244 will require you to bounce around from one service to another to catch every fight.

The action is kicking off at 6:30 p.m. ET from Madison Square Garden in New York City on Saturday, November 2. The fighting will start with the early prelims, which will air on UFC Fight Pass, a $9.99-per-month streaming service that offers both live and on-demand UFC content.

After that, the preliminary card will kick off at 8 p.m. ET on ESPN 2, so you’ll need to go to your television or favorite streaming service to watch those fights. At 10 p.m., it’ll be time to turn over to ESPN+, where you can catch the biggest fights of the night.

Speaking of those fights, here’s a breakdown:

Middleweight: Kelvin Gastelum vs. Darren Till

If you're traveling outside the country during UFC 244, you'll still be able to watch it. A virtual private network, or VPN, can help you connect to your desired streaming service through a U.S. server and watch the draft as if you were at home.

Here are three VPN options worth considering, should you need them during UFC 244.

How can I live stream UFC 244 without a cable or satellite subscription?

If your goal is to watch every fight on Saturday, you’ll first need to sign up for UFC’s Fight Pass, which costs $10 per month for access to the company’s live-streaming fights, as well as on-demand content, including old fights and original programming. UFC Fight Pass is available to stream on everything from your smartphone to your computer and set-top boxes.

Next up, you’ll need to subscribe to ESPN+, a $50-per-year service that streams sports games in both major and minor sports leagues, as well as UFC fights. Be aware, however, that since UFC 244 is a PPV event, you’ll need to pay $60 on ESPN+ to watch the main card, if you’re already an ESPN+ member. If you’re new to ESPN+, you can get a one-year subscription to ESPN+ and access UFC 244 for $80.

Between the early bouts on UFC Fight Pass and the main card on ESPN+, you’ll need to be able to stream the preliminary card on ESPN 2. Luckily, there are several places to watch ESPN 2, and you can see where below:

How can I watch UFC 244 with a cable or satellite subscription?

If you still have a cable or satellite subscription and you haven’t signed up for many streaming services, watching every fight during UFC 244 might be impossible.

To watch the early prelims, for instance, you need to have a $10-a-month UFC Fight Pass subscription. UFC doesn’t offer a television stream for that round.

You will, however, be able to watch the UFC 244 preliminary round, thanks to ESPN 2, which is ubiquitous on the dial, but then you’ll need to turn to ESPN+ to watch the main card.