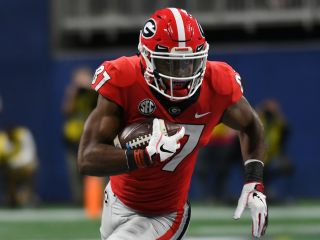 A berth in college football's postseason playoffs is at stake when the LSU Tigers face the Georgia Bulldogs in the SEC Championship game today (Dec. 7). And with both teams eyeing a national title as well as the SEC crown, you figure that it's going to be a fiercely fought football game.

Whether you want to see if Heisman hopeful Joe Burrow can lead LSU to an undefeated regular season or if Georgia can pull off the upset, you're not going to want to miss the SEC championship. And thanks to a variety of options for live streaming LSU vs. Georgia, you don't have to. Here are all the ways you can watch this decisive college football match-up.

When can I live stream the LSU vs. Georgia game?

LSU and Georgia kick things off from Mercedes-Benz Stadium in Atlanta at 4 p.m. ET/1 p.m. PT. CBS is broadcasting the game, so if you've got a TV, all you need is an HDTV antenna — no cable subscription required.

In the UK, BT Sport/ESPN will pick up coverage of LSU vs. Georgia.

How can I use a VPN to watch the LSU vs. Georgia live stream?

If you happen to find yourself in a part of the world that's not carrying the LSU vs. Georgia game, a virtual private network, or VPN, can help you watch the SEC Championship. With a VPN, you can disguise your location, making it seem as if you're surfing the web from home, where you can enjoy your regular access to streaming services.

After testing many different services, our pick for the best overall VPN is ExpressVPN. We think it offers the best mix of performance and customer service at a good price.

How can I live stream the LSU vs. Georgia game?

With the LSU vs. Georgia game airing on CBS, you'll find the game on the CBS Sports website, which has a special page dedicated to the network's SEC game of the week. The CBS Sports app (Android, iOS) can certainly help as well, as it will feature a live stream of LSU vs. Georgia for mobile devices.

The problem is that you'll need a cable or satellite TV subscription to use either of CBS's live stream options, as you'll be required to sign in with your TTV provider's login credentials. That's no good if you've gotten rid of cable TV.

How can I live stream the LSU vs. Georgia game without a cable subscription?

You've still got streaming options for live-streaming LSU vs. Georgia, but you'll need to subscribe to a streaming service that carries CBS. The easiest option is CBS's own streaming option. CBS All Access costs $5.99 a month and includes access to all the network's live sports broadcasts in addition to original programming like the upcoming Star Trek: Picard series.

Otherwise, pick a subscription streaming service that includes CBS in its package with channels. Check each service for your area, as local channels aren't always included, depending on where you live. Here's a round-up of your best options.

Fubo.TV: A streaming service with a focus on live sports, Fubo.TV starts at $55 a month and includes CBS among its channels. A cloud DVR feature lets you record games like LSU vs. Georgia to watch later.View Deal