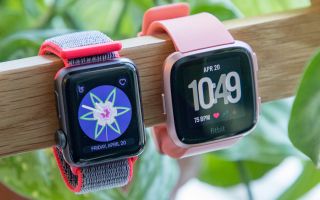 Google will acquire wearable fitness tracker maker Fitbit, according to an announcement made this morning (Nov. 1).

The deal values Fitbit at $2.1 billion, marking the purchase as Google’s largest in the wearable space since it bought Fossil’s smartwatch technology for $40 million in January. It’s also another move on Google’s part to compete with the Apple Watch in the fitness tracking market.

Though WearOS powers a number of Android watches, Google has yet to join Apple and Samsung in developing in-house hardware designed for maximum compatibility with its flagship smartphone. Friday’s news makes us wonder if the long-rumored Pixel Watch is on the horizon.

The Apple Watch’s seamless iPhone integration and fitness features have given it an edge against companies like Fitbit, but Fitbit seems confident working with Google will advance its products.

“Google is an ideal partner to advance our mission,” said James Park, co-founder and CEO of Fitbit in a statement heralding the deal. “With Google’s resources and global platform, Fitbit will be able to accelerate innovation in the wearables category, scale faster, and make health even more accessible to everyone.”

Google expressed its own health ambitions when it unveiled new products in October, like the new Pixel 4 and Pixel 4 XL smartphones. Its acquisition of Fitbit could assist in bringing them to fruition.

"Fitbit has been a true pioneer in the industry and has created terrific products, experiences and a vibrant community of users," said Rick Osterloh, senior vice president, devices & services at Google. "We're looking forward to working with the incredible talent at Fitbit, and bringing together the best hardware, software and AI, to build wearables to help even more people around the world."

Investors appeared pleased that the rumored acquisition will be carried out. Fitbit's stock rose 16% as of 10 a.m. ET Friday morning.

"Wear OS isn’t great, and even when its implemented well as Fossil was, the end product is just okay," says Greengart. "That’s not good enough to compete against Apple. Or Samsung, for that matter."

Google has not released its own chip for smartwatches, which Greengart says is holding the company back. Most Wear OS products are currently powered by Qualcomm platforms. But should Google combine Wear OS with a proprietary chip, it could change the conversation.

"Google has been trying to tackle the smartwatch industry from a software only perspective and it has not been successful," Greengart says. "Now that it's explicitly tackling it from a hardware perspective, it's certainly a move in the right direction. It gives them more options."