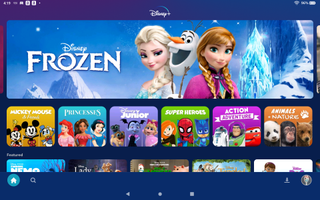 Disney Plus is as family-friendly as a streaming service gets. For little ones, it packs rated-G content and animated series; then there are brand-new originals like The Mandalorian and cult classics like The Simpsons for older audiences.

Yet while every member of the family can curate a custom profile, there’s apparently nothing keeping little kids out of their parents' or older siblings' accounts. Yep, Disney Plus’ parental controls don’t have a lock.

They do exist, though, to a short extent. Once they've signed up for Disney Plus, parents can designate a separate “kid profile” to their children with age-appropriate rated catalogs. When using a kid profile, only content that’s rated G, TV-Y, TV-Y7/Y7-FV, or TV-G will be available to stream from the colorful interface.

But should a curious child want to see more Disney Plus shows, they can simply exit their kid profile and hop into a different one on their family’s account. Unlike Netflix or Amazon Prime, there’s no PIN or password required to enter an adult’s account on Disney Plus.

Now, it’s not like Disney Plus supplies graphic material like Netflix's Orange is the New Black or Hulu's The Handmaid’s Tale, but it’s still a bit baffling that there’s nothing stopping a six-year-old from watching The Simpsons.

Even among our mixed-age staff, there’s ample debate on whether Homer & Co. are child-appropriate. We conceded that it’s ultimately up to the parent, but parents using Disney Plus don’t have that option.