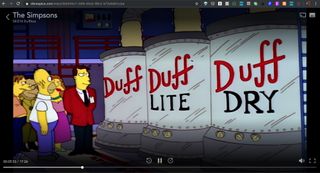 Simpsons fans who've subscribed to Disney Plus will likely be thrilled to find 30 seasons of the long-running animated series available on the new streaming service. They won't be so happy when they get a look at the older episodes of The Simpsons available on Disney Plus, though.

Disney Plus airs The Simpsons in a 16:9 aspect ratio, which is fine on more recent episodes of the show. But for the first 19 years of The Simpsons, episodes appeared in a 4:3 format, meaning Disney Plus stretches those older episodes out to 16:9.

That doesn't just create a bad look, where everything looks zoomed in. The Simpsons includes a lot of visual jokes in the background, so many of those gags get cropped out of older episodes that have been stretched to stream at a 16:9 aspect ratio.

If all this sounds familiar, The Simpsons ran into the same problem when reruns of the show began appearing on the FXX cable channel five years ago. FXX also aired older episodes in the 16:9 aspect ratio causing the same problems and outcry currently happening with Disney Plus. FXX did offer one concession, though — on the Simpsons World app, you could adjust the aspect ratio to 4:3 to view Simpsons episodes in their original format.

Whether Disney follows suit or just starts airing episodes from the first 19 seasons of The Simpsons in their correct aspect ratio remains to be seen, as Disney Plus is contending with other problems on launch day. But even a brief scan of Twitter suggests that Simpsons fans aren't pleased with the current look of The Simpsons back catalogue.

Once again at launch of a streaming app all SD episodes of the Simpson’s distort a 4x3 image to 16x9 and leave no way of streaming episodes in their original aspect ratio. All other media originally formatted in 4x3 is available to stream in its original format. @disneyplusNovember 12, 2019

If #DisneyPlus doesn’t deliver on their promise of 4:3 aspect ratio I WILL become a real life Disney villain. https://t.co/lczyLOIA4INovember 12, 2019

Adding insult to injury, at least one Twitter user claims that a Disney Plus rep told him prior to the service's launch that Simpsons episodes would appear in their original aspect ratio.

Yeah, I’m not happy about this. Hey, @DisneyPlusHelp - you said in a DM to me The Simpsons would be available in the original aspect ratio. What’s the deal?November 12, 2019

We'd expect Disney to comment one way or the other. After all, who wants to challenge Mr. Burns' position as the most hated man in Springfield?