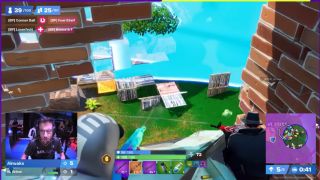 The biggest video game competition of all time is underway. Top-ranking Fortnite players from around the world have converged in New York City for the first ever Fortnite World Cup Finals.

The tournament will run for three days and is expected to attract hundreds of thousands of viewers. Along with bragging rights, the top 100 players and top 50 Duos teams are competing for a massive $30 million prize pool.

Here is everything you need to know about the Fortnite World Cup finals, including the tournament schedule, where you can watch the event, how to get tickets and who is expected to win.

When is the Fortnite World Cup Finals?

The Fortnite World Cup Finals takes place between July 26 and July 28 at the famous Arthur Ashe tennis stadium in Queens, New York. Epic Games' website says that the fan festival will begin at 9:30 AM ET with the stadium opening at 11:30 AM ET.

Qualifier tournaments began on April 13 and alternated between duos and solos for the following 10 weeks. Each week, 100 played dropped into a round of Battle Royale to determine who would be going to the main event at the end of July. The final qualifying competition ended on June 21.

How can I get Fortnite World Cup tickets?

Tickets to the World Cup Finals have been sold out for weeks, so your best option to watch it in person is to buy tickets from an exchange site, like StubHub. Three-day passes are currently starting at $75 but that price will fluctuate as the event draws to a close.

How to watch the Fortnite World Cup Finals

Can't make it to NYC? Don't worry, the World Cup Final is streaming on YouTube, Twitch, Facebook, Twitter and within the game (look for the Watch Live button when you log in). If you want to watch on your TV, you can either cast Chrome tabs using a Chromecast or stream the World Cup from the Twitch or YouTube app on a Fire TV, Apple TV or Roku.

The duos competition, which involves the top 50 teams battling in six matches, begins on Saturday, July 27 at 1:00 PM ET with the pre-show beginning 30 minutes prior. The duos finals should end at around 4:00 PM ET when the doors close. It will be followed by a winner's ceremony at 4:45 PM ET.

The solos finals, in which the 100 top players will earn points over six rounds, starts on Sunday, July 28 at 1:00 PM ET with a pre-show at 12:30 PM ET. Like the duos finals, the solos competition should last around 3 hours and will be followed by a ceremony at 4:45 PM ET.

There's a lot going on at the Fortnite Finals beyond the actual solos and duos competitions. On Friday, July 26 at 4:00 PM ET celebrities and pro players will pair up to compete in the 50-team Celebrity Pro-am 2019 competition for a $3 million charity prize pool. Ninja will team up with artist Marshmello, Airwaks will play with producer RL Grimes and MoyorZ87 and actor RJ Mitte (Breaking Bad) will join forces in this start-studded round of duos.

Who are the favorites?

Before we talk about some of the players who will compete in the finals, you'll probably be more interested to hear who won't be there.

Richard "Ninja" Blevins failed to qualify for the World Cup Final. After dropping from solo qualifying, the most popular Fortnite streamer announced that he and teammate Malachi "Reverse2k" Greine finished 25 points shy of what was required to qualify for the World Cup. That news is sure to disappoint Ninja's 14.5 million Twitch followers and 22 million YouTube subscribers.

With Ninja out of the competition, all eyes will turn to Turner "Tfue" Tenney, who has a cool 10 million YouTube subscribers of his own. Tfue failed to qualify for the duos competition with teammate Cloak, but this top-ranked player qualified for solos where he'll be a favorite. Other veteran players you should keep an eye on including Bizzle, Vivid and Zayt.

We'll also keep tabs on 14-year old phenom, Kyle "Mongraal" Jackson, who will be competing in both solos and duos (You have to be at least 13 years old to compete).

Solo players will try to gain as many points as possible over six matches by outlasting the other players or teams in a 100-player Battle Royale round.

The last person or team standing will be rewarded 10 points for winning the Victory Royale. Contestants who place 2nd to 5th earn 7 points, those who place 6th to 15th earn 5 points, the 16th to 25th ranked players gain 3 points. The remaining 75 players earn only 1 point.

Epic Games will update the scoreboard after each match so you'll know who is in the lead. After the six matches, the scores will be tallied and the prizes will be handed out to the top ranking players.

If multiple competitors tie, Epic Games will determine the winner by the total number of Victory Royales followed by the average eliminations in each session, the average placement per match and a coin toss, in that order.

Epic Games will hand out a whopping $30 million in prize money, with players receiving different amounts depending on where they rank.

The winners of the solos and duos competition will earn $3 million each, while the second-place player/team will be handed $2.25 million. Bronze medalists will receive $1.8 million and fourth-place contestants get $1.5 million. The payouts drop quickly from there, but every contestant, even those who place last, will score $50,000.