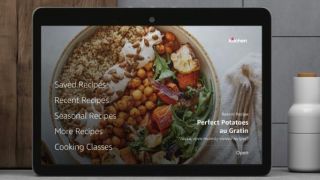 When I leave the office, I reprieve my duties as a lightbulb-loving, smart home writer for Tom’s Guide. But sometimes it makes sense to take my day job home with me. Like when I had the chance to test out the Food Network Kitchen app for a month as an extension of my Echo Show 8 review.

Food Network Kitchen is a subscription service that lets you take live and on-demand cooking classes with your favorite Food Network chefs and producers. Users can save recipes and watch commercial-free Food Network shows, too.

A Food Network Kitchen membership costs $6.99 per month for a minimum of 6 months, or $39.99 per year. First-time subscribers start with a 30 day free trial.

Food Network Kitchen provides a two-week schedule of live cooking classes hosted by a variety of celebrity chefs and Food Network test kitchen producers. Though you can tune in to any class as its airing, you can set reminders and curate grocery store lists ahead of time.

If you connect your Instacart, Peapod or Amazon Prime Fresh account, you can get the list of necessary ingredients delivered to your home. This takes a huge chunk of prep work out of cooking, especially for those like me who have a 9-to-5 job impeding on our culinary endeavors.

Plus you’ll want to be prepared once classes begin. They’re rather fast-paced, and you’ll fall behind if you’re digging through your pantry for vanilla extract. I made this mistake during a slice-and-bake sugar cookie class.

But because the class was only 9 minutes long, it was no bother to rewind from the beginning. All past classes are available on-demand, meaning you don’t have to tune in live to take advantage of Food Network Kitchen’s cooking demonstrations.

The Food Network Kitchen app acts as a recipe book, too. You can bookmark as many Food Network recipes as you’d like, no matter if there’s a corresponding live class.

You can organize your saved recipes using Pinterest-style boards. I grouped my favorite winter dishes together, for example. A pumpkin alfredo tortellini recipe in particular proved worth keeping handy.

Holy tortellini I’m in fall flavor heaven! Experimenting with the @FoodNetwork Kitchen app on the Echo Show 8 resulted in pumpkin alfredo pasta for dinner and I’m just really ok only eating this for the rest of my days pic.twitter.com/W4flbADHyaDecember 9, 2019

Recipes searches can also be thoroughly filtered. “Quick & Easy” and “5 Ingredients Or Less” proved to be two of my favorite categories, but diet and cuisine filters are just as useful.

Though I started using Food Network Kitchen while reviewing the Echo Show 8, I hit some obstacles with Amazon’s latest smart display. For one, the Alexa app’s interface is severely limited compared to the iOS app. While I could easily launch episodes of The Pioneer Women from manual controls, I failed to access a past class no matter how many variations of “Alexa, show me a cooking class for Quiche Lorraine,” I tried.

I had better luck using an iPad as my sous chef. It provided the complete dashboard on its larger display. I couldn’t use voice control and the Echo Show 8 sounds better though, so there are trade-offs involved when considering which device to use.

But if you’re not keen on the Food Network culture, you might not be fulfilled by the Food Network Kitchen App. It feels like an aggressive extension of Food Network TV. Consider New York Times Cooking for a more editorialized recipe library.